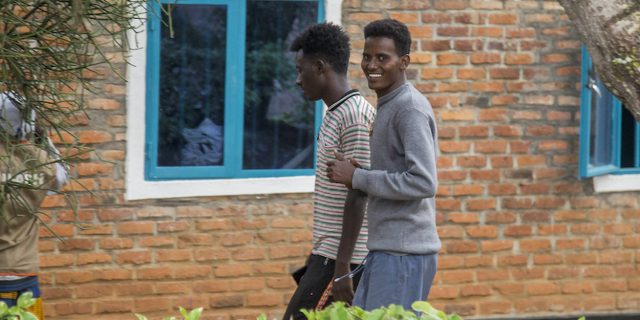 Lindignant reactions have multiplied since the signing, Thursday, April 14, of a controversial agreement between Rwanda and the United Kingdom which provides in broad terms that London can send some of its asylum seekers – who arrived illegally on its territory – in Rwanda. In return for financial aid, Kigali has undertaken to welcome these migrants – until their file is processed – and possibly to integrate them into the country. International human rights organizations are up in arms. They denounce a subcontracting of the migration issue.

For months, Boris Johnson and his government have been seeking to conclude agreements with third countries where to send migrants while waiting to process their file. Rwanda and Ghana had been mentioned, but Accra strongly denied in January that it was in discussions with the United Kingdom on the subject.

A country that dreams of becoming a welcoming land

In Rwanda, this announcement also provoked strong reactions. For several observers, this agreement with London represents both a political and economic opportunity for the Kigali authorities. For Rwandan officials, it is also a question of image. Rwanda is not a country that comes to mind spontaneously when the issue of migrants is mentioned. And yet, the country has a long experience in dealing with the issue of refugees and resettlement. Rwandans are particularly aware of this. At one time, Rwanda was marked by exoduses, before becoming, in the 1990s, one of the largest contributors of refugees in the world. President Paul Kagame himself grew up in a refugee camp in Uganda. The country has therefore logically adopted a welcoming approach.

The small state of 12 million already hosts more than 130,000 refugees not only from the Great Lakes region, but also from Afghanistan, Libya, and recently displaced Ukrainians. “Addressing the challenge of migration is a shared responsibility for Africa, Europe and the international community. Every young African or migrant from elsewhere should be able to lead a dignified, productive and safe life on the African continent”, justifies the government as Africa seeks to make its voice heard on the global migration crisis.

A complex agreement to implement

For the new arrivals, who decide to stay there, Kigali promises the automatic right to work, to create businesses, to access all available services, including mutual health insurance; in short, newcomers will be invited to become part of the Rwandan community. “From day one, migrants will be offered investments in human capital,” the government says. However, the implementation of the agreement, whose initial duration is five years, seems complex and costly. For now, it has been disclosed that in exchange lThe Rwandan government will receive £120 million (144 million euros)with the possibility of increasing these amounts if the program proves to be a success. “But, above all, Rwanda is a safe and secure country, with a respect for the rule of law and, clearly, a range of institutions that have evolved and developed over time. And, with that, you have to look at the skillful way in which Rwanda has already ensured the resettlement of nearly 130,000 refugees from several countries,” said British Home Secretary Priti Patel from Kigali.

The Rwandan opposition wants to make its voice heard on this issue. “The Democratic Green Party of Rwanda supports the reception of refugees who have chosen Rwanda as their first destination, but not those who have chosen to go to the United Kingdom or other European countries. We believe that rich countries, including the United Kingdom, should not offload their international obligations, “said Frank Habineza, the president of this party, on Twitter. Especially since “Rwanda already has a fairly dense population, there is already not enough land for everyone, there will be competition for natural resources, he assures us. Welcoming migrants from Great Britain will only accentuate this land problem even more, will pose daily challenges and risks creating conflicts between Rwandans and migrants”.

Same story on the side of the opponent Victoire Ingabire, of the Dalfa Umurinzi party (the party Development and Freedom for all). “The Rwandan authorities should focus on addressing the political and social issues that drive Rwandans to seek refuge abroad before offering to ‘take in refugees or migrants from other countries,’ read a statement. released Thursday. “Rwanda has always been ranked among the safest countries in the world, but, at the same time, it is a country where its inhabitants are not happy. »

Words that reinforce the concerns of some Rwandan and international organizations about the future of the future beneficiaries of this project. Indeed, the question that comes up is: can Rwanda be considered a safe country? The organization Human Rights Watch is very severe: it judged that “the British plan to send asylum seekers to Rwanda is cruel and ineffective, but also very probably illegal”. In addition, UNHCR said in a statement released on Thursday, “Rwanda’s deplorable human rights record is well documented. […] In fact, the United Kingdom has directly communicated its human rights concerns to Rwanda and has granted asylum to Rwandans who have fled their country, including four in the last year alone”.

Precedents with Israel and negotiations with Denmark

This is not the first time that African states have been offered such an offer. Rwanda has also already signed an agreement of this type with Israel and Uganda in 2014. Indeed, the country has hosted asylum seekers rejected by Israel for several years, many of whom then tried to reach Europe. , alert international organizations. The experience was to be repeated in 2017, but, faced with public outcry, the project was quickly buried.

Since 2019, the country has hosted a transit program, managed by the United Nations High Commissioner in partnership with the African Union, which evacuates migrants detained in Libya. Most of them are from East Africa, Eritrea, Sudan and Somalia and are temporarily being taken care of in Rwanda while waiting for their cases to be examined by Western countries. According to the OECD, in a note published in 2018, in collaboration with the International Labor Organization and the EU, while the contribution of immigrants to the Rwandan economy is relatively small, it is growing. And, unlike many other developing countries, immigrants in Rwanda are on average better educated and work in more productive sectors than the native-born population. The authors of the analysis estimate that “immigrants contribute more in taxes than they receive in government benefits, which has a positive effect on the budget balance”.

Recently, Denmark began discussions with Kigali to outsource asylum applications, but this time the African Union stepped in. ” Such attempts to stem migration from Africa to Europe are xenophobic and completely unacceptable,” the institution said last August, as Danish MPs debated the bill, launched by the Social Democratic government.. ” Lafrica has much to show the world as it continues to generously shoulder the burden of 85% of the world’s refugees, often in protracted situations, while only 15% are hosted by developed countries. » The AU argued the 1951 Geneva Convention on the Rights of Refugees, of which Rwanda is a signatory. It indicates that asylum seekers can only be returned to a third country which, according to an official agreement, guarantees that their rights will be preserved, and that they will not have to change country again.