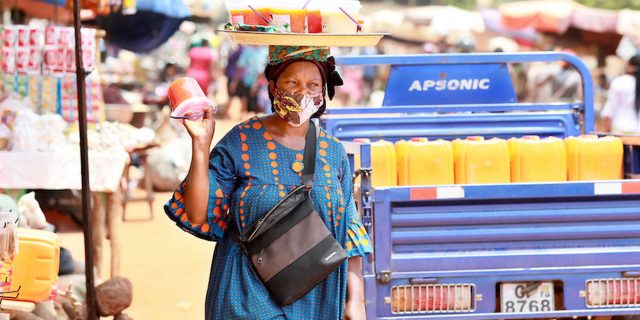 Dn a general context characterized by the health crisis which continues to affect all economic sectors of West African States, another challenge has emerged with insistence at the start of the year, that of inflation which spares none of the layers of the population.

“Customers are flocking, but they can no longer buy as before”

Togo serves as a model in the sub-region for its management of the pandemic thanks to the introduction of a financial assistance program called Novissi, intended for vulnerable groups, which has made it possible to mitigate the harmful effects in the short term. of the crisis on households. Unfortunately, this program will not be enough to reduce the plight of households at this time.

At the central market in Adawlato, one of the largest in the country, this phenomenon was felt during the holiday season. The market, which formerly recorded a significant increase in activity during the same period, is now experiencing a period of sharp decline in sales because of the increase in the cost of living. The phenomenon continues at the start of the year and raises fears of the worst in the months to come.

“Sometimes we go a whole day without selling a thing. Customers are pouring in, but they can no longer buy as before. We wonder how the following months will be ”, complains Justine Aboki, a thrift store saleswoman.

This situation is explained by the considerable rise in the prices of basic necessities such as cereals, milk, oil, flour, wheat, cosette, meat, fish, etc. The bowl of corn (the most popular cereal of Togolese), which sold for 500 FCFA (around 75 cents) last March, is currently selling for 800 FCFA (around 1.22 euros), an increase of around by 35%. Ditto for other imported consumer products which also recorded an increase of around 40% between June and December 2021. “I have never experienced such a holiday season. Our markets for our food supply have not changed, but the prices of products have almost doubled in the markets. The tin of tomatoes has gone from 250 FCFA (around 40 cents) to 350 FCFA (1.2 euros), ”points out Akos Dewonou, a seamstress who had just done her shopping at the Adawlato central market. Moreover, some malicious traders are also singled out for their involvement in excessive speculation.

“The period following the health crisis was marked by speculation of all kinds and it continues. Some crooked traders are still trying to create an artificial shortage of a number of FMCG products. Our association has even intervened to draw the attention of the public authorities to this kind of practice ”, indicates Fridolin Kofi Adonsou, in charge of legal affairs at the Togolese Consumers Association (ATC).

The multiple causes of inflation

Most actors attribute this phenomenon to the direct consequences of the global health crisis which led to a decline in economic activities throughout the West African region after the borders were closed in 2020. Households have seen their purchasing power decline. In Togo, it is believed that the causes are also endogenous.

Indeed, the country has experienced a recent increase in fuel prices at the pump coupled with that of taxes on motor vehicles at tolls at the beginning of the year. This increase has had repercussions on all sectors of activity, starting with transport. “The transport sector plays a major role in the supply chain for consumer products. If the sector experiences an increase, this will automatically impact the pricing pyramid for consumer products, ”recognizes Albert Mensah, a logistics expert.

Already, Togolese consumer rights defenders had sounded the alarm bells in June following the rise in fuel prices as well as toll taxes. “For some time now, the prices of cereals, basic necessities and construction materials have been soaring in our country. This critical situation in this period of health crisis has a negative impact on the basket of the housewife and makes it difficult to access consumer products in view of the financial difficulties of our fellow citizens despite certain laudable actions of the government in favor of the populations on the social and economic level. », Specifies a press release from the Togolese Consumers Association. And to add: “The silence of the public authorities gives free rein to speculation in the commercial and distribution circuit. “

The Togolese prelates, for the first time, joined the lot of the denunciators by questioning the Togolese authorities on the phenomenon of the high cost of living. Some actors in the agricultural world agree on the fact that the unfavorable climatic conditions also contributed to harvests lower than expected in the sub-region, thus making the regional cereal market unstable. This situation has forced some neighboring countries to turn to Togo for grain supplies; which did not allow the country to maintain prices on its local market despite a cereal surplus of around 70,000 tonnes during the previous agricultural season. Consequently, the Togolese authorities have taken protectionist measures by banning the export of cereals. From now on, the export of certain consumer products is subject to authorization.

The inflationary trend that has gripped the sub-region has not spared the country either. In fact, the Togolese authorities have announced a record inflation rate of 4.1%, a first for a decade. “For the first time in 10 years, the average inflation rate has reached an exceptional level of 4.1% at the end of the first nine months of 2021”, confirms Sani Yaya, Minister of the Economy and Finance .

The Togolese authorities try their best to regulate prices on the local market. Like some countries in the sub-region such as Côte d’Ivoire and Ghana, Togo has reactivated its price monitoring committee on the local market. This committee, made up of officials from trade unions, the private sector and consumers, will have the heavy task of ensuring, alongside the authorities, that the prices on the local market are correct. In addition, a toll-free number, 8585, was set up on January 5 to allow consumers to denounce any abnormal and speculative practice that could escape the vigilance of the teams of inspectors and trade controllers who have been crisscrossing for a few weeks. the different markets of the country. That said, the battery of measures taken to control speculation still does not make it possible to straighten the upward curve of prices on the local market at the start of the year.

This is the reality mixed with exogenous factors which also impact the prices of consumer products. For the Togolese authorities, the country cannot escape certain factors which are currently contributing to the rising cost of living phenomenon. “The issue of cost of living is a global issue. Very regularly, we hear here and there that the situation is specific to our country, but this is not the case. We just have to look around us. The issue of inflation which is shaking our countries is first and foremost due to the international situation. Ask the traders in the markets and they will tell you that the price of freight, that is, transport, has tripled or even quadrupled. This easily impacts the cost price of the goods, ”recognizes Professor Akodah Ayewouadan, Minister of Communication and Media, government spokesperson. To curb the harmful effects of these exogenous factors on the local market, the authorities are promising other major actions in the course of this year.

A face-to-face meeting between authorities and consumer advocates

Already, Togolese officials are entitled to a one month salary allocated to their scholarship as a loan to help households. “For this year, the authorities’ priority will be how to contain inflationary pressures due to the rise in food prices which follows the delayed effects of the increase in oil prices”, reassures Sani Yaya, the Minister of the Economy and Finance.

This displayed goodwill on the part of the Togolese authorities is still not enough to reassure defenders of consumer rights in the face of the proven fear of movements of social discontent. “Living together needs a policy with an action plan. This policy must allow citizens to flourish and to hold together. This requires social justice which must improve the living conditions of citizens. Purchasing power does not increase while the price of consumable goods increases. A policy which does not anticipate, does not transform living conditions, which does not improve the purchasing power of citizens must expect recriminations ”, argues Roger Ekoue Folikoe, professor and researcher in political philosophy at the university from Lomé.

For the time being, several possible solutions are recommended by certain players to resolve this phenomenon in the short term. These include, among other things, improving the basket of the housewife through a salary increase as well as an increase in the pension of retirees, the student grant and the rehabilitation of the Commission de la vie chère. In Togo, the amount of the SMIG (guaranteed minimum interprofessional wage) is 35,000 FCFA (approximately 55 euros) compared to 60,000 FCFA in Benin, from the end of January 2022 (approximately 92 euros), 33,139 FCFA in Burkina Faso ( around 50 euros).