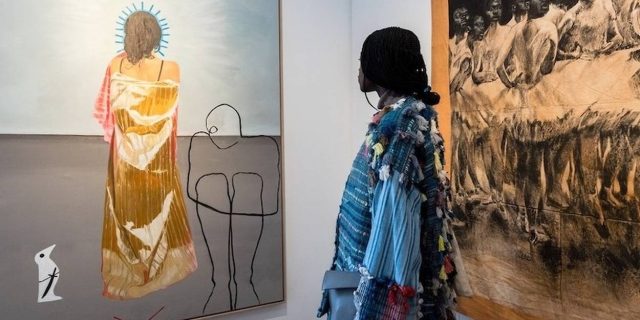 Lhe Ivorian gallery owner Gazelle Guirandou does not regret her choice. Coming to exhibit in Paris for the 1-54 fair (A continent for 54 countries) which was held at Christie’s from April 7 to 10. ” We have done sold out “, she rejoices. Initially, the contemporary African art fair was to be held in Marrakech in early March. Faced with the uncertainty linked to the Covid pandemic, Touria El Glaoui, the director of the event, preferred to cancel the Moroccan meeting to resume the same formula that had worked well last year: a fair in Paris, in the very beautiful private mansion from the Christie’s auction house. For 4 days, 23 galleries exhibited around fifty African or diaspora artists.

Last year, between two waves of Covid, art lovers came by invitation, masked, to rush to the fair. “But this is something else again, rejoices Touria, director and founder of 1-54. This year, no audience gauge imposed. The visitors are there, and, above all, they have a buyer’s soul. From the first day, a lot of works were already sold. At Magnin-A, the Angolan Ana Silva, who weaves links between her personal story of transmission and a more universal story, by embroidering on raffia or plastic bags, has been a hit. All the exhibited works were sold from the first day.

Read:  New Pokémon Snap, walkthrough: all our guides to becoming the best Pokémon photographer of 2022!

“I use mixed techniques, mainly collages and masking of all kinds of paper and in particular crepe paper, for its texture. In flea markets at the big Adjamé market, I find old books that are no longer published. I question society, history, mutations. I wonder about the fragility of memory. I feel like a desire to rewrite history,” explains Sess Essoh. Artist keen on reading and passionate about philosophy, who invites us to reflect.

Ange Dakouo, a pupil of Abdoulaye Konaté, whose tapestries exhibited by the Italian gallery Primo Marrella and gallery 38 could also be admired, also works on woven pieces. “My technique, which I call woven amulets, is inspired by the amulets worn by traditional hunters, the Dozos. I personalize my charms with cardboard, newspapers, then I weave them together to create a harmonious universe, through which the charms represent people who are supposed to protect each other”, explains Ange Dakouo. The artist will be present alongside Seydou Camara and Aboulaye Konaté at the very prestigious Documenta 15 in Kassel in 2022.

Another artist, weaver of unparalleled works, the Madagascan Joël Andrianomearisoa, was also present on the stands of Primo Marrella and Sabrina Amrani. His monumental installation was a great success at the Venice Biennale in 2019.

Photography, not to be outdone

In terms of photography, we oscillate between the very young Prince Gyasi, 26, with images saturated with dazzling colors (Nils gallery) and the black and white prints of the Malian portraitist Seydou Keïta (Nathalie Obadia gallery). The Moroccan photographer Mous Lamrabat (Loftartgallery) denounces through often masked characters, the consumer society by mixing ostentatious luxury and counterfeiting, while placing them in a Moroccan landscape. With photographer François-Xavier Gbré (Galerie Cécile Fakhoury) architecture takes precedence and colonial remains explore the past. The man disappears.

Throughout the visit, the realistic portrait is often essential. Portrait of face, profile, proud, women and men, anonymous, as in the Greek gallery The Breeder which presents three Nigerians Ocheja Johnson, Adesina Adegboyega and Victor Kenechukwu. Other artists question invisibility and erasure. At Cécile Fakhoury, Dalila Dalléas Bouzar wonders about the place of women in society, with a standing portrait, draped in gold, but from behind, while Roméo Mivekannin, who caused a great sensation last year in 1-54 Paris, continues its questioning of the place of the black body in the history of art, with The dance lesson by Degas.

In Paris, 1-54 has found its audience

“The public here is much more cosmopolitan than that of Marrakech, Paris remains Paris, with all these fairs, Art-Paris was taking place at the same time. I also saw a much younger clientele,” notes Gazelle Guirandou. It’s true, there was no shortage of events devoted to art. In addition to the very large Art-Paris fair which presented 130 exhibitors, more intimate, the Artcurial auction house organized an exhibition, entitled “Flamboyant tribute to nature”, around two African painters Pilipili Mulongoy and Joseph Ntensibe. Representative of the Hangar school and modern Congolese art, Pilipili Mulongoy, who died in 2007, represented scenes of wild life imbued with harmony, summoning fauna and flora. For his part, the Ugandan painter Joseph Ntensibe immerses us through large formats, in a tropical garden where the luxuriant and dreamlike nature erases all traces of man.

In Paris, 1-54 has found its audience and the success of this second edition, smaller than the one presented in London, but rich in great discoveries, could encourage Touria El Glaoui to make this Parisian stopover permanent. Finally, the agenda is already full. “We are delighted with the success of this second Parisian edition, and of course we hope to come back in force in Marrakech in 2023, while waiting for all our efforts to be concentrated on our next edition in New York (May 19-22, 2022) as well as the celebration of our 10and edition in London next October”, concludes Touria El Glaoui.