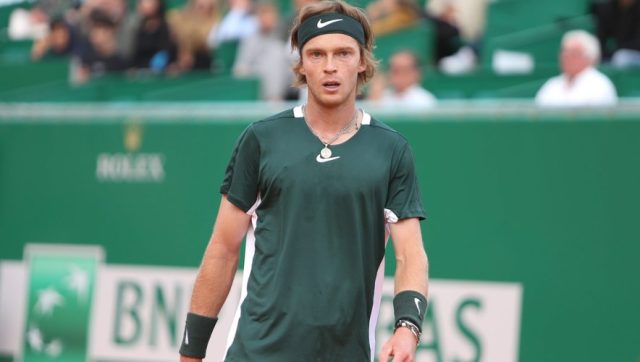 Russian Andrey Rublev, world No. 8, estimated on Thursday April 21 that the exclusion of Russian and Belarusian players from the next Wimbledon tournament because of the conflict in Ukraine was “totally discriminatory” while the Belarusian Federation, condemning a decision which only “incites hatred and intolerance”, says consulting legal firms.

“The reasons they (Wimbledon, editor’s note) gave us had, how to say, no sense, they were not logical,” said Rublev on the sidelines of the ATP 250 tournament in Belgrade which he is playing this week.

“What is happening now is totally discriminatory against us,” he continued. “It will not change anything,” also assured the player, who had written “No war please” on a television camera during the Dubai tournament just after the Russian invasion of Ukraine.

“Giving the tournament prizes to humanitarian aid, to families who are suffering, to children who are suffering, that’s something that would have a little impact,” he suggested to the organizers of the London tournament, who handed out a total of £35m in winnings last year (equivalent to €42m).

“In that case, tennis would be the only sport to give away such an amount, and it would be thanks to Wimbledon, who would get all the glory.” His compatriot Karen Khachanov, 26th player in the world who qualified Thursday evening for the semi-finals of the Belgrade tournament, declared himself “very sad, disappointed and devastated that these things are happening”, he who considers that Wimbledon is “the ‘one of the most beautiful tournaments in the world’.

For Minsk, an “incitement to hatred and intolerance”

In a statement issued Thursday evening, the Belarusian Tennis Federation (FBT) “categorically condemns the decision taken by the Wimbledon organizers to suspend Belarusian and Russian players”.

“Such destructive acts do not contribute anything to a resolution of conflicts, but only incite hatred and intolerance on a national basis”, she continues. The FBT adds that “consultations are underway with international legal firms specializing in sports law” and that “a strategy is being developed aimed at protecting, above all, Belarusian tennis players worldwide” .

Wimbledon management announced on Wednesday the exclusion of Russian and Belarusian players from its 2022 edition due to the war in Ukraine, a decision hotly contested by the ATP and WTA.

As things stand, neither the Russian Daniil Medvedev, world No. 2 who is recovering from an operation for a hernia, nor the Belarusian Aryna Sabalenka, world No. 4 and semi-finalist last summer in London, will be able to defend their chances in the Lawn Tennis Temple (June 27 – July 10).

The four Grand Slam tournaments (Australian Open, Roland-Garros, Wimbledon and US Open) are independent of the men’s and women’s circuits, where Russians and Belarusians are still allowed to participate in the tournaments, under a neutral banner.

And the ATP described on Wednesday as “unfair” the decision taken by Wimbledon, especially since it extends to all the grass tournaments this summer in Great Britain, in particular Queen’s and Eastbourne, yet under the aegis of the ATP. The WTA also declared itself “very disappointed” with the announcement made by Wimbledon, which it considers “neither fair nor justified”.

Ukrainian player Elina Svitolina, who decided to cut a few weeks due to intense physical and mental fatigue, said for her part that Russian and Belarusian athletes who speak out publicly against Russia’s invasion of their country “should be allowed” to line up at Wimbledon.

“That for me is the main point. If they didn’t choose this, if they didn’t vote for the (Russian) government, it’s right that they are allowed to play.” In a statement posted on her social networks, Billie Jean King, American tennis legend with 12 Grand Slam titles, including six at Wimbledon, observes that “(she) cannot support the exclusion of individual athletes of any tournament whatsoever solely on the grounds of their nationality”.