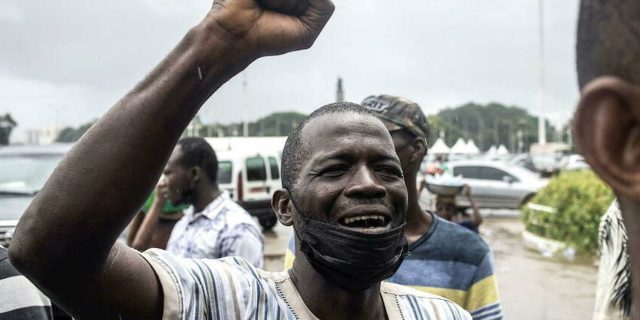 Lhe military junta led by Colonel Mamady Doumbouya, commander of the Guinean special forces, seized power on September 5, 2021. At the rate we are going, it seems undecided to put Guinea back on the track of democracy and of civil power. As soon as it took power, the junta sought to erase the effects of its assault on the presidency, which cost the lives of several dozen soldiers, mainly members of the presidential guard. Mamady Doumbouya’s National Committee for Recovery and Development (CNRD) has indeed tried to make people forget the brutality of this attack, by ensuring dignified treatment for the deposed head of state and allowing him to travel abroad.

From his first speech, Mamady Doumbouya pronounced the words long awaited by the population tired of the arrogance and isolation of Alpha Condé. The former president had in fact not taken the measure of the wave of protest, represented in his eyes by a handful of “petty drug offenders” from neighborhoods with a Fulani majority, supposedly manipulated by his main opponent, the former liberal Prime Minister Cellou Dalein Diallo and his party, the Union of Democratic Forces of Guinea (UFDG). France and the United States were also concerned about Guinea’s rapprochement with Turkey and its appeals in favor of Russia.

The first measures of the junta, aspiring to fight against mismanagement and corruption, undoubtedly won him the favor of the population. The CNRD has frozen, among other things, various bank accounts, those of the presidency, ministries, members of the outgoing government, as well as directors of taxes, customs, the Treasury and the Budget. Ministers were ordered to return their company cars and hand in their passports. Certainly symbolic measures, but which can only be acclaimed by the populations.

But this represents only a meager viaticum. A genuine transition and development program remains to be established. Mamady Doumbouya cannot limit himself to following the path of his predecessors. Of the six presidents who have succeeded since 1958, four are soldiers (including three putschists): himself, Colonel Lansana Conté (1984), Captain Moussa Dadis Camara (2008), as well as General Sékouba Konaté (2009 ), responsible for leading a democratic transition, which was never completed.

Read:  Bose QC45: one of the best wireless headphones is finally on sale

Introducing an inclusive dialogue framework is an imperative prerequisite

The challenges ahead are many. The country, which boasts of having the largest bauxite reserves in the world – on which China has set its sights – has experienced annual growth of 5% in recent years. Yet 70% of its population still lives on less than $3.20 a day. Aluminum production, which increased from 16 million tonnes in 2013 to 88 million tonnes in 2020, has hardly benefited the population. The prerequisite for the socio-economic development of the country and a fairer redistribution of its wealth is based on the restoration of democracy and therefore the success of the civil transition.

Under these conditions, the democratic future of the country seems to rest largely on the shoulders of Cellou Dalein Diallo who, during the first round of presidential elections in 2010, had obtained 44% of the votes against 18% for Alpha Condé, a result that the latter succeeded in overthrowing with the help of maneuvers which subsequently allowed him to cling to power.

Cellou Dalein Diallo, president since 2007 of the Union of Democratic Forces of Guinea (UFDG), was Prime Minister between December 2004 and April 2006. He proved to be a competent and loyal man. In his message of New Year’s greetings, he posed as a unifier and urged the junta to lay the foundations for a framework of dialogue with the political class. It is besides behind him that a hundred political parties gathered to set up a platform called “Collective of political parties”. This is a plural political front which suspects the military junta of wanting to stay in power. It thus demands the holding of free elections in the coming months, placing itself de facto as the main alternative to the military junta.

Create the conditions for a democratic transition

It is now up to the CNRD to choose the voice of wisdom by setting up a framework for inclusive political dialogue, bringing together representatives of political parties, the government, civil society and technical and financial partners. The highly sensitive subject of the duration of the transition should indeed be defined on the basis of the time required to carry out the actions essential to the organization of credible elections. Beforehand, it would be a question of proceeding with the drafting of a new Constitution, of revising, if necessary, the Electoral Code, of setting up a body for managing the elections without political subordination and finally of drawing up an inclusive electoral register that faithfully reflects the reality of the Guinean electorate. What had, under the Alpha Condé era, been sorely lacking and contributed to artificially strengthening the electoral strongholds of the ruling party.

International pressure on the junta

The period of uncertainty cannot be prolonged too long, and the praetorians in power in Conakry must conform to current democratic standards in Africa. No state of emergency appears necessary. The international community is fully aware of this and does not relax its pressure on the junta. 1er January 2022, Guinea was excluded from the African Growth and Opportunity Act (Agoa), the treaty on growth and development opportunities in Africa, set up in 2000 under the Clinton administration to facilitate and regulate trade between the United States and Africa. Indeed, this agreement, which guarantees duty-free access to thousands of products on the American market for many African countries, is conditional on respect for human rights, good governance and the protection of workers.

For its part, ECOWAS (Economic Community of West African States), which had condemned the September 5 coup, but which had subsequently expressed its readiness to support the transition in the face of its slowness. here, just raised his voice. During their 60and ordinary summit, which ended on December 12, the heads of state maintained their sanctions against Conakry pending concrete progress in the organization of democratic elections. Guinea was also suspended from the African Union. The sooner democracy is established, the more it will be durable and inclusive, and the more the conditions for a more widely shared prosperity will be met. And the sooner Guinea will emerge from political and diplomatic isolation.

* Eugène Berg, former French ambassador to Namibia and Botswana, essayist and professor at the Center for Diplomatic and Strategic Studies (CEDS).