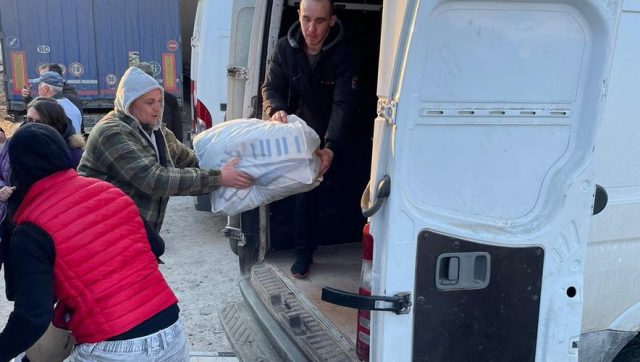 The seven trucks from Emmaüs Rodez, Millau and Albi, accompanied by six additional utilities from the Union of Ukrainians in Romania in the department of Satu Mare (north-west of the country), were all unloaded this Sunday, March 6, at the end of ‘afternoon. This first expedition, set up in just a short week, was a success.

“This war awakened people’s humanism. There, we made a hell of an epic for a good cause.” Léo Xowie, 30, an employee of Emmaüs, in Millau, knows this. He, the fifteen other volunteers of the humanitarian convoy, which left Rodez on Friday March 4, as well as the hundreds of donors from Aveyron and Tarn, have shown incredible generosity towards the Ukrainian people.

This Sunday, March 6, at the end of the afternoon, the seven trucks were completely unloaded, in Ukraine, near Halmeu, a border village, west of Romania. Twenty tonnes of foodstuffs, hygiene products, clothing and blankets will thus benefit refugees on the road to exile, while 1.5 million people have already fled their country at war, according to the latest United Nations (UN) figures.

Read:  Ukraine: Romania fears to find itself on the front line against Moscow

Shortly before 2 p.m. local time, the utilities left Micula, near Satu Mare, where they had been stationed since the day before, when the French team arrived on Romanian soil. Six other vehicles from the Union of Ukrainians in Romania accompanied them (UUR). On the other hand, only three Aveyronnais, in possession of a valid passport, crossed the border between the two countries.

The other drivers were all UUR volunteers. Once at customs, everyone had to wait a good two hours, the time needed for the agents of the two nationalities to check all the documents. The first vehicle entered Ukraine at 5 p.m. The very last came out at 7:30 p.m. The goods were entirely transferred to various Ukrainian heavy goods vehicles, which will transport them to the four corners of the country, according to needs and traffic possibilities.

“We are ready to leave”

“For something that was put together in four days, it’s great, rejoiced Hervé Durand, the president of Emmaus Millau. We were able to adapt to the reality on the ground. We made a few mistakes. But “, overall, we haven’t done much. If we have the capacity and if the humanitarian situation requires it, we are ready to leave in a few weeks.” An assessment and a perspective shared by Véronique Magnaux, the manager of the Rodez and Villefranche-de-Rouergue centers, despite a small nuance: “We will not leave to leave again. We have to have the right products, especially food and hygiene products. And his Millavian sidekick assures that potential donors are already numerous: “I constantly have messages on Messenger from people they want to give.”

The other volunteers did not have the words, when it came time to testify about their experience at the other end of the European Union, on the borders with a country at war and directly involved with dozens of refugees.

“It was a great experience,” soberly affirmed the millavois Christian Gelis. The dean of the expedition did not know Emmaus. He had simply responded to an ad online, twenty-four hours before departure, which stated that the association was looking for a driver. And he is already reserving his place for the next convoy.

A partnership in the making

Bonds of friendship have already been born between Occitans, Ukrainians, Romanians and even with the Hungarians, who held the tent of the Order of Malta, near the border. A partnership will even be born between Emmaüs and Stea, an association that works for the education and integration of poor populations around Satu Mare, particularly from the Roma community.

The tragedy of refugees

The refugees who succeeded one another, all night and all day at the border, reminded the various volunteers of the drama that an entire European people is going through. With this terrible war, it is therefore millions of people who throw themselves on the roads of exile. Including a lot of children, who had to leave their room, their toys, their friends, their school, without knowing if they will find them one day.