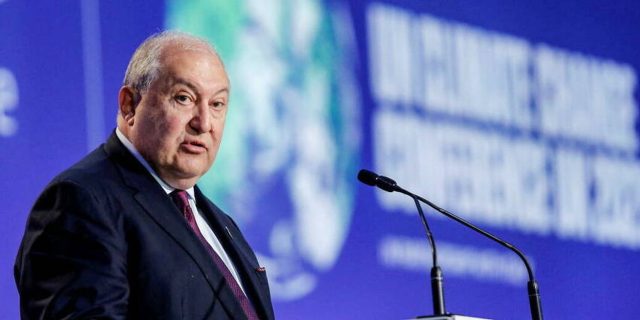 LArmenian President Armen Sarkissian announced his resignation on Sunday January 23, 2022, citing his inability inherent in his largely ceremonial functions to “influence” the political life of his country, which is currently going through a crisis. “This is not a decision motivated by emotion and it stems from a specific logic”, explained Armen Sarkissian in a press release posted on his official website. “The president does not have the tools to influence important foreign and domestic policy processes in difficult times for the people and the country,” he added, with executive power largely in the hands of Prime Minister Nikol Pashinian.

Armen Sarkissian has been at the center of a political crisis that erupted following Armenia’s 2020 defeat in a war with neighbor and longtime rival Azerbaijan over control of the disputed region of Nagorny-Karabakh. Armen Sarkissian and Nikol Pashinian disagreed on the decision to dismiss the army chief of staff in the aftermath of the conflict between these two former Soviet republics in the Caucasus which left more than 6,500 dead. “I hope that the changes in the Constitution will eventually be implemented and that the next president and the presidential administration will be able to operate in a more balanced environment,” the statement read.

Read:  Good deal news Pokémon Legends Arceus is out in just 1 month and pre-orders at the best price are open!

Armen Sarkissian, born in 1953 in Yerevan, served as prime minister in 1996-1997, before being elected president in March 2018. Armenia’s economy has been struggling since the collapse of the Soviet Union in 1991. Money sent by Armenians abroad has played a very important role, contributing to the construction of schools, churches and the realization of other infrastructure projects, including in Nagorno-Karabakh.