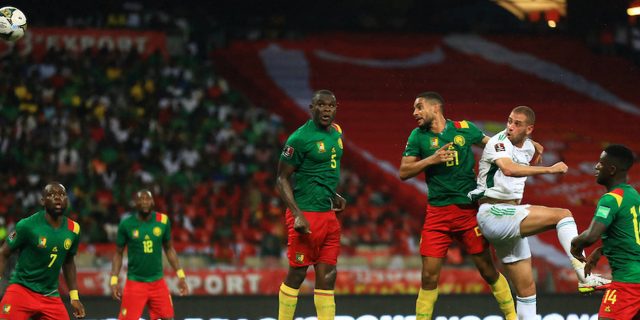 Ihe men of Djamel Belmadi, with an important victory in Cameroon (1-0), have an option on qualification for the World Cup in Qatar, potentially a nice revenge following the missed last African Cup of Nations. Regarding the Indomitable Lions, a reaction is expected. Will they be there when they play outside, in a Mustapha-Tchacker stadium in Blida known to be the fortress of the Fennecs? And in front of thousands of Algerian supporters gathered sometimes since Sunday to try to get a ticket just to have more chances to attend this meeting which will perhaps take Algeria to Qatar? In any case, the “Greens” must also be wary of the pride of the Indomitable Lions, who aim to keep the participation record of an African country with an eighth World Cup.

The sale of tickets for the Algeria-Cameroon clash at the Tchaker stadium in Blida!

>> It’s been madness since around the stadium: thousands of supporters slept in front of the stadium to arrive first ��❤️���� #Tchaker #ALGCAM #Qatar2022 pic.twitter.com/6B77jFw58c

Mission accomplished in Japoma without taking a goal

Faced with numerous questions following its missed CAN, Belmadi’s Algeria responded present in Yaoundé. Guided by his faithful striker Islam Slimani, who left his mark on the match with his goal, his personality and his leadership, the Fennecs took a very serious option on qualification before the return match in Blida with this victory on the score of 1-0 in Douala.

Organized in a 5-2-3 system with a solid base around the attacking trio: Mahrez-Slimani-Bellaili, Algeria, even without playing a great match, was able to regain a certain stability and solidity making it combative, displaying a state of mind that was missing during the defense of his title during the African Cup. With 36% possession, 5 shots and two on target against 10 shots and 4 on target on the Cameroonian side, the figures do not fully illustrate the course of the meeting where a Cameroon, rather well entered the meeting, disintegrated minute after minute. “Algeria did not come to play. Our players were there to play, our goal was to play. Football, if you put 7 people behind, it’s complicated,” said Rigobert Song after the game. Algeria aimed to reassure itself, thing done.

“We won the battle but…”

If the spirit of revenge has certainly weighed in the equation, the question of the future of Djamel Belmadi has undoubtedly taken precedence over the rest for players who have shown that they are ready to give everything for their coach. It is therefore a symbolic and very important victory for the morale of the Fennecs. To be confirmed today against a Cameroon who must redeem themselves after their missed match against their public. This is the Indomitable Lions’ first home defeat since 1998 and a match lost against Ghana, counting for the CAN 2000 qualifiers (won by… Cameroon), the equivalent of a series of 51 matches. without defeat. Which makes the performance all the more notable for Algeria. However, this is not a reason to ignite for a Djamel Belmadi still so measured and focused on the essentials: “We still have one game left. What we managed to do at home, they tell themselves that they can do it at home. We know it. The players were happy, but they all knew that there was still the return leg. A very important game. The players are focused. The qualification is not yet obtained. We won the first battle, we still have a second one which will also be difficult. Like we said, it’s qualifying for the World Cup and you have to go through those kinds of moments. »

Having to deal with the injury of full-back Rami Bensebaini, Belmadi called in attacking midfielder Sai Benrahma to replace him. As for the player who should take the place of left side, Ahmed Touba (RKC Waalwijk) is tipped to occupy the position. For the rest, the 5-2-3 of the first leg should logically be renewed.

Back to the wall, the Indomitable Lions will have to offer more consistency to question Algeria in front of its public. While it was said that they were able to fill the absences of winger Moumi Ngamaleu and attacking midfielder Zambo Anguissa, it is clear that the influence of these two players was greatly missed by Rigobert Song’s men. . The tenure of former Parisian Choupo Moting on the right side did not bear fruit and the lack of ball percussion at the foot clearly failed the teammates of captain Vincent Aboubakar, hit in the heel and released at half-time during of the first leg. About the top scorer of the CAN, he should make his return: “Vincent Aboubakar has a recurring heel problem. The heaviness of the pitch tonight (Friday, editor’s note) made the pain worse, which is why we replaced him at the break to avoid making his case worse. We’ll see what happens in our next game, but we’re sure he’ll be available to help the team,” Song reassured.

This is an additional difficulty for Cameroon following the departure of Portuguese coach Antonio Conceiçao in recent weeks. Although Rigobert Song praises the merits of his predecessor, whose passage allowed him to build a backbone with great potential, the timing of his arrival with his debut in such an important double confrontation against a revanchist team like Algeria, coupled the absence of such important executives is not ideal and the former captain of the selection intends to use this first match to make corrections for the second leg. “We are competitors. We know what it takes and we know where we are going. We came across a good team to whom we owe a lot of respect. Algeria did what it took to win their game. We weren’t able to manage certain small details which then caused us difficulty. But we had the opportunity to see what went wrong. Tomorrow, we will do our best to bring out what we have not been able to achieve at the offensive level. We know it won’t be easy. There won’t be enough Cameroonian supporters, but we are used to this kind of match. We will try to be really competitive. We have a young team, but youth is not a sign of weakness. We came to play. We will do everything to do better than in the first leg on Friday”, thunders like a warning Rigobert Song.