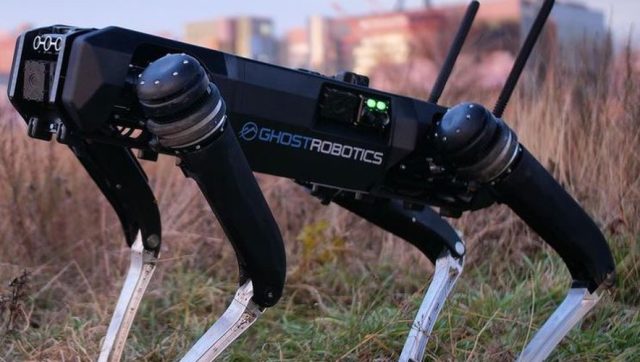 US border forces may soon be equipped with new advanced technologies. Authorities are experimenting with the use of robot dogs for surveillance of the country’s borders.

The United States Department of Homeland Security (DHS) published a blog post, spotted by The Verge in which he reveals his experiments with robot dogs.

Robots tested in the South West of the country

The American Southwest is a particularly inhospitable region for patrols, which is why robot dogs could soon be patrolling there, explains the American authorities. Tests have been carried out in this direction, and the conclusions seem to open the way to the development of this new monitoring tool.

It is the company Ghost Robotics, a direct competitor of Boston Dynamics, which produces the machines tested in the field. According to our colleagues, the “Ghost Vision 60”, the most popular model in the range, can travel more than 8 kilometers in 3 hours on a single battery charge. It can be piloted remotely or move on an automatically defined route. Additional equipment can be added, for surveillance (thermal camera, night vision) or for the offensive (weapon). Regarding the implementation of firearms, the Department of Homeland Security would not have tested the device.

In these tests, robot dogs are used to monitor borders and their surroundings (buildings, train, etc.). “The goal of the program is to leverage technology to increase CBP (Customs and Border Protection) presence and reduce human exposure to life-threatening hazards,” says DHS. However, these true legged drones are not infallible. The autonomy and stability of some machines can be a problem.

These robot dogs could soon be deployed in the field, after the refections on the use in real conditions and the needs have been defined. One more step towards the digitization of security services that could give ideas to other nations, especially in Europe.