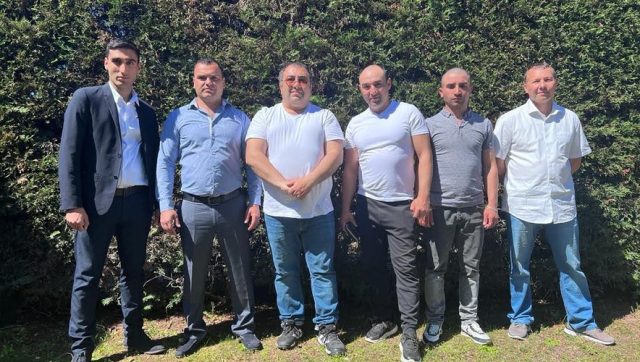 In Montpellier, some companies like Shems Construction are beginning to gradually recruit refugees.

Since their arrival on Montpellier, the mobilization around the Ukrainians is always full. Emergency reception, housing… today, it is the question of employment that raises questions. If the government has launched a module dedicated to companies wishing to hire these war refugees, some have not waited for its implementation.

Like Shems Construction, Shababyan Samand’s masonry company. “The first Ukrainian family that I helped was a mother and her children whom I met in the street. I accompanied them to the services of the tourist office, then to associations so that ‘they can get help’he explains.

When the father of this family ended up joining his relatives here, in Montpellier, he decided to offer him a work contract within his company. For the past week, a total of ten Ukrainians have joined his team. One on a permanent contract, the nine others on a fixed-term contract. “There are many who were already working in construction in Ukraine, but I also have a lawyer for example. And he is very motivated. What they are asking for is just to be able to work. of their family”he points out.

If, for Shababyan Samand, language is not a problem, “I speak French, Armenian and Russian, so we manage to understand each other”, he says. For others, it can present a barrier.

In this sense, the SOS Montpellier Ukraine association is trying to find solutions. “For the moment, we are mainly focusing on housing, which is more or less stable, and on learning French”says a member of the association.

The question of duration

However, she recognizes that if the State services, via Pôle emploi, have not yet approached them, other companies such as hotels where the Ukrainians have stayed, offer contracts. “But it’s really on a case-by-case basis”she adds.

Thanks to the mobilization of these companies, some Ukrainians have been able to find a job, even if it does not always correspond to their qualifications. But for some, this period is only temporary. Because some still hope to return to their country.

For Shababyan Samand, this has no impact on his desire to make the contracts of these new employees permanent. “I would like to be able to sign more permanent contracts, but I need to be supported for that, to get more sites. Because I sometimes have breaks of two or three weeks”, he says. He thus met the mayor of Montpellier, Michaël Delafosse, in the hope of obtaining municipal projects.

A meeting with the mayor of Castelnau-le-Lez, Frédéric Lafforgue, has also been set. “The meeting with Mr. Delafosse went rather well, now I’m waiting to see. Because if I have more possibilities, I could hire even twenty Ukrainians if necessary”he hopes.