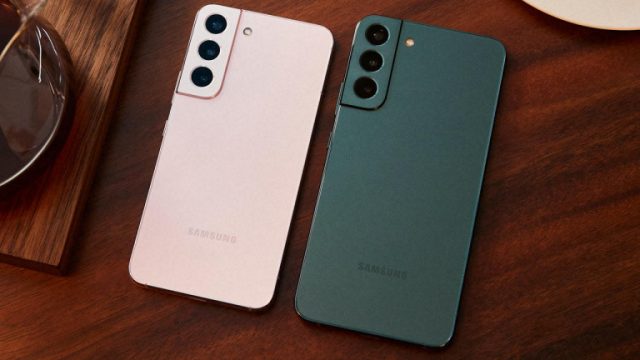 The new flagships of Samsung have just been presented and we had the opportunity to discover them in preview in the French premises of the manufacturer. Galaxy S22, S22+ and S22 Ultra: here are our first impressions of these new very high-end terminals.

In the very competitive world of smartphones, there are several highlights throughout the year, but two in particular stand out: the presentation of the new iPhones by Apple in September, and the release of the new Galaxy S from Samsung, in usually in February or March. The Korean manufacturer is thus respecting tradition and has just presented three new models: Galaxy S22, Galaxy S22+ and Galaxy S22 Ultra. Three representatives of the brand’s know-how in screen, photo, design and performance.

This year, Samsung has decided to gently evolve its range, with in particular the Galaxy S22 and S22+ with a design very similar to the Galaxy S21. We find in particular a photo module of three sensors, with a rounded design and which blends into the chassis. The result is still as attractive as ever, but, from afar, we could completely confuse the two generations of smartphones.

But in detail, we see that Samsung has particularly optimized the contours around the screen, in particular by reducing the lower border by a few millimeters. It doesn’t look like much, but when you place an S21 and an S22 side by side, the difference in size is obvious. However, the Galaxy S22 has a screen of almost equivalent size, since it is 6.1 inches against 6.2 inches for the S21. The Galaxy S22 therefore gives the impression of being a “small” smartphone, while its screen exceeds 6 inches.

The grip is therefore particularly pleasant. The S22 and S22+ will also be available in several colors and we were particularly seduced by the green model, which displays a matte treatment for the best effect and a certain sobriety. The white and pink models seemed a little too “shiny” to us and we have some doubts about the fingerprint side marking.

Anyway, the S22 and the S22+ are very similar, with an identical design, but a screen diagonal that goes from 6.1 to 6.6 inches. The S22+’s battery is also larger (4,500 mAh vs. 3,700 mAh), which should bring better battery life to the larger model. Both models are IP68 certified and can therefore withstand immersion in 1 meter of water for 30 minutes.

Galaxy S22 Ultra: the replacement for the Galaxy Note

The case of the Galaxy S22 Ultra is a bit apart. Samsung’s top-of-the-range model, sold from $1,259 in the 128 GB version, benefits from a very different design, which is more inspired by the Galaxy Note. The latter no longer really exists at Samsung and the manufacturer should now bet on this “Ultra” version for its large-screen smartphones (here 6.8 inches) and for the experience of handling the stylus.

The “S-Pen” is indeed included and can be stored in a dedicated slot in the lower part of the smartphone. We therefore find the possibility of taking handwritten notes, taking screenshots by drawing a square on the screen or even using handwriting recognition. This S22 Ultra is particularly well finished and benefits from an absolutely sublime matte chassis, which is further reinforced by Gorilla Glass Victus Plus, which should make it particularly resistant.

On the screen side, Samsung has always done a great job on its Galaxy S, and these new S22 should be no exception. We are dealing with AMOLED panels on all models, with a refresh rate of up to 120 Hz in “adaptive” mode. This means that the screen will adapt its refresh rate according to the content displayed, in order to save battery power. Concretely, the Galaxy S22 is able to go down to 10 Hz and the S22+ and S22 Ultra can drop down to 1 Hz.

Another interesting detail: the very high maximum brightness of the three panels. The Galaxy S22 Ultra and S22 + can thus reach 1750 cd / m2 in “native” (without HDR content), and the S22 will show at the maximum at 1300 cd / m2. This should offer excellent readability, even better than on the previous generation. The Galaxy S21 Ultra indeed displayed a peak light of around 1000 cd/m2.

A photo part still as promising

Like the screens, the photo has always been a key argument of Galaxy S smartphones. Again, it is necessary to differentiate what the S22/S22+ offer from the S22 Ultra. The first two are quite close to what we found on the S21, with three sensors: a 50-megapixel wide-angle, a 12-megapixel ultra-wide-angle and a 10-megapixel telephoto lens with x3 optical zoom. At the front, the 10 megapixel sensor should ensure very beautiful selfies.

We don’t really have the opportunity to properly test the camera of the Galaxy S22 range, but, given the characteristics, we can expect something excellent, capable of taking over from the Galaxy S21 and compete with the iPhone 13 and 13 Pro. The argument of the x10 optical zoom, in particular, seems particularly strong to us.

An exynos 2200 boosted by an AMD iGPU

In terms of power, again, we were unable to properly test the Galaxy S22s, especially since no game was installed on the models we had in our hands. As a reminder, Europe will be entitled to models equipped with a Samsung Exynos 2200 SoC: a chip engraved in 4 nm which benefits from an AMD Radeon graphics part under RDNA 2 architecture. The same as found on the PS5 and the Xbox Series. Of course, we do not expect the same level of power at all, but we are curious to see the fluidity and the level of performance on big games like Genshin Impact, Fortnite or CoD Mobile. It should also be noted that, as with the Galaxy S21, North America and Korea will be entitled to a version equipped with a Snapdragon 8 Gen 1 chip. If you swear only by Qualcomm, you will therefore have to rely on imports.

This first contact with the Galaxy S22 range therefore proved, unsurprisingly, to be quite reassuring. We are still dealing with a summary of the best in high-end smartphones, the Korean manufacturer meticulously ticking each box of its specifications. Excellent quality screen, high-performance camera, powerful chip… We now hope that autonomy will be there and that the One UI 4.1 interface will be practical and fluid on a daily basis.