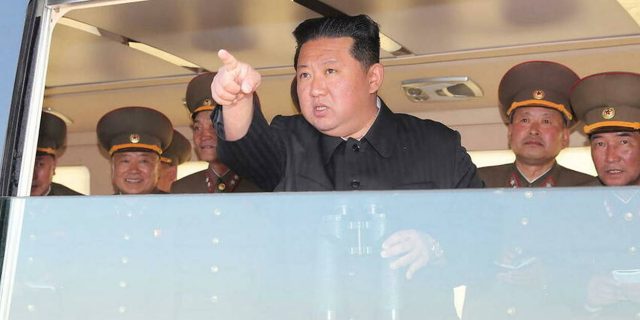 LNorth Korean leader Kim Jong-un has overseen the test-firing of a new weapon system that will increase the effectiveness of his tactical nuclear weapons, state media said on Sunday (April 17th), capping celebrations surrounding the birthday of the founder of the country. The launch is the latest in an unprecedented series of sanctions-busting weapons tests this year, including the firing of a full-range intercontinental ballistic missile (ICBM) last month.

According to the official KCNA news agency, the new tactical guided weapon is “of great significance” in radically improving the firepower of long-range artillery units and boosting the efficiency of operating tactical nuclear weapons. . KCNA added that the test was successful, without specifying the exact date or the place where this test firing was carried out. The South Korean armed forces headquarters said it detected two projectiles launched late Saturday, which flew a distance of 110 km at 25 km altitude with a speed of about Mach 4.

Read:  Animal Crossing New Horizons: What to do if you're bored?

The United States said it was “aware” of the North Korean statement about the test and was monitoring the situation. Photos published by the newspaper Rodong Sinmun showed a smiling Kim Jong-un surrounded by uniformed officials and cheering as he watched what was described as the weapon’s test firing. The leader gave the military research team “important instructions” on further building defense capabilities and nuclear combat forces, the KCNA news agency added. Analysts say the weapon is a new, but no less important, short-range ballistic missile.

On Friday, North Korea celebrated the 110th birthday of North Korea’s founding leader, Kim’s grandfather Kim Il-sung, with a huge public procession, fireworks and synchronized dancing – but not military parade as predicted by many observers. South Korean and American analysts and officials had also believed that a nuclear test was possible on this important anniversary. The celebrations came three weeks after Pyongyang’s biggest ever intercontinental ballistic missile test, a first since 2017.