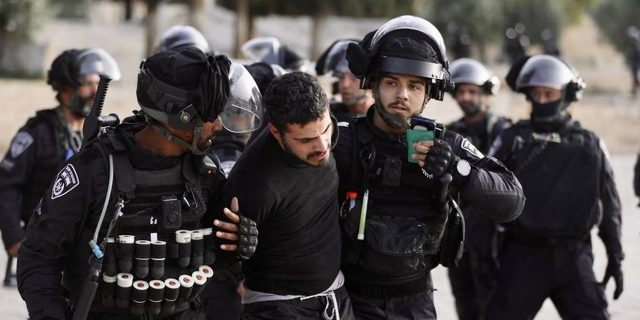 Lhe tension has risen again in Israel. More than twenty people were injured on Sunday April 17 during clashes between Palestinians and Israelis on and around the esplanade of the Mosques in Jerusalem, the scene of violent clashes on Friday. The Esplanade of the Mosques, also called Temple Mount by the Jews, is located in the Old City in East Jerusalem, a Palestinian sector occupied since 1967 by Israel.

Early on Sunday, ‘hundreds’ of Palestinian protesters began heaping ‘stones’ on the plaza shortly before religious Jews arrived at the spot, considered Judaism’s holiest and Islam’s third holiest site , Israeli police said. The Israeli security forces entered the esplanade of the Mosques in order to “dislodge” these demonstrators and “restore order”, specified the Israeli police.

The Palestinian Red Crescent reported 19 wounded Palestinians, some of whom were hit by rubber bullets. Since the capture in 1967 and then the annexation by Israel of East Jerusalem, unrecognized by the international community, Jews have been authorized to access the esplanade at certain times, but not to pray there. The prayer normally takes place at the Wailing Wall, below, even if for years religious Jews have been praying in secret on the esplanade. These incidents come as Sunday in the Old City of Jerusalem, the crossroads of the three monotheistic religions, Christian festivities for Easter, prayers for Passover, Passover, and for the holy Muslim month of Ramadan.

“Al-Aqsa (name given in Arabic to the esplanade of the Mosques, editor’s note) is ours, and the Jews have absolutely no right to it,” said in a press release Ismaïl Haniyeh, head of the political branch of the Hamas, Palestinian armed Islamist movement which controls the Gaza Strip, territory under Israeli blockade. In Palestinian neighborhoods of Jerusalem, mosques called on the faithful to come to the esplanade, according to journalists from Agence France Presse. And in the Gaza Strip, more than a dozen rockets were fired Sunday morning towards the Mediterranean Sea, according to media close to Hamas.

In a statement, Israeli Prime Minister Naftali Bennett reaffirmed that “the security forces had carte blanche to (…) ensure the safety of Israeli citizens”. “We are trying to calm the situation on the ground while taking determined action against the causes of the violence,” added Naftali Bennett.

On Friday morning, after weeks of tension linked to attacks by two Palestinians in the Tel Aviv area and Israeli “counterterrorism” operations in the occupied West Bank, clashes erupted between Israeli police and demonstrators on the esplanade. Mosques, where the Dome of the Rock and the al-Aqsa Mosque are located.

Read:  War in Ukraine: Russia banned from the world of sport, the state of play live

The Israeli forces notably entered the Al-Aqsa mosque during these clashes where more than 150 Palestinians were injured, an intervention which had aroused strong condemnation from Muslim countries. Jordan, which administers the esplanade of the Mosques, blamed Israel for this new escalation of violence, with King Abdallah II calling on the Jewish state to “end the illegal and provocative measures that lead to greater escalation” in violence.

Turkish President Recep Tayyip Erdogan spoke on the phone Sunday with Palestinian President Mahmoud Abbas, a political rival of the Islamists of Hamas, to congratulate him on his “calm” and his “good judgment” in this affair, he said. he stated on his Twitter account. “Turkey was always on the side of Palestine, added Recep Tayyip Erdogan who told Mahmoud Abbas, according to a statement from the Palestinian presidency, that he “will establish contacts with the parties concerned to put an end to the Israeli escalation “.

The UN had already called for a “de-escalation” in order to prevent tensions in Jerusalem from turning, like last year in May, into a war between Hamas and Israel. At the Vatican, during the traditional “Urbi et Orbi” blessing for Easter, Pope Francis pleaded on Sunday for “free” access to the holy places in Jerusalem: “may Israelis, Palestinians and all the inhabitants of the Holy City, with the pilgrims, to experience the beauty of peace”.