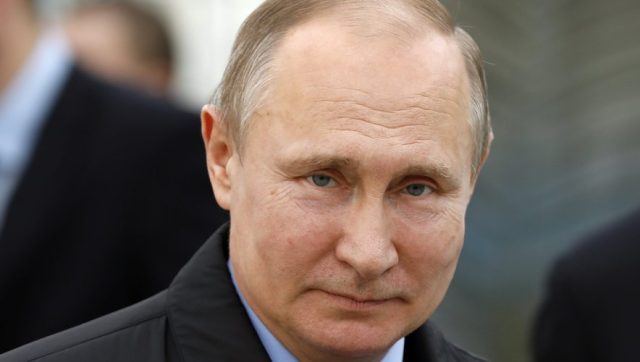 Ambitions, strategies, targets, military means… Carole Grimaud Potter, specialist in Russia at the University of Montpellier answers our questions on the intentions of Vladimir Putin’s Russia at the time of the war in Ukraine.

Carole Grimaud Potter is a professor of Russian geopolitics at the University of Montpellier and at the Institut Diplomatique de Paris. She founded the think tank CREER in Geneva (Center For Russia and Eastern Europe Research). The researcher answers our questions about the deep ambitions of Vladimir Putin, in Ukraine and more generally in Eastern Europe.

We see that the Russian troops are bogged down. The death toll is between 5,000 and 6,000 dead, according to the Americans. On the Ukrainian side, it would be 15,000. Today we see far fewer troop movements, to preserve as many soldiers as possible. It’s a carnage. If you compare the figures with Afghanistan, these are 15,000 dead in 10 years, in Ukraine we would be at almost 10,000 dead in three weeks. It is absolutely abominable. The military are reviewing their strategy. They no longer engage in troop movements. The goal (of the Kremlin, editor’s note) is to take the arc which goes from Kharkiv, to the northeast, all of Donbass, all of the maritime coast of Ukraine, to Moldova. Even if, there is a timid takeover of the Ukrainian army, especially in the south of the country, in Kherson.

Russia now appears to be targeting civilians. Is this a new maneuver?

At first it was the military and air bases (which were bombed, editor’s note), then the Russians turned to the cities. We have seen that it is the homes that have been affected. You have to take the cities, and the cities are dwellings. The strategy does not change but today we are witnessing a lot more bombardments and aerial offensives rather than ground ones. The goal is to keep as many troops as possible on the spot.

The United States evokes the imminent use of chemical and biological weapons by Russia. What is the interest for the Kremlin?

The interest is the shock, to hope that the troops surrender. Hope that the population no longer struggles, no longer resists. It is a weapon that is used for the purpose of hit public opinion, the Ukrainian government and make the population bend and resistance. But this hypothesis is up to the United States.

Volodymyr Zelensky repeats it regularly, Ukraine would not be the last country on Vladimir Putin’s list. Can we reasonably think that the Russian president will invade other nations after Ukraine?

Zelensky waves the red flag to scare the Europeans. He says it, he has been hammering it for some time: ‘the war is in Ukraine and the next ones are you'”. On the Russian side, the army could not extend its aggression to other countries, especially since with NATO countries, Russia knows very well what to expect in return. The Russian army is taking a real setback in Ukraineit will not be able to extend the fighting to other fronts.

A Russian analyst estimated that the scenario for Ukraine was prepared ten years ago. This brings us back to the annexation of Crimea, in the years 2014. It is a scenario in the drawers which was reviewed regularly. If ever the intention is to reorganize Europe as it was before 1997, and therefore all the integrations in NATO, it is a much longer term plan.

Read:  Call of Duty Warzone, Season 1 Vanguard: Fighter Jets Are Landing, Where To Find Them

What are the possibilities for a way out of the crisis?

Putin won’t give up. It’s an existential war for the Kremlin. He engages his credibility, he engages his very existence as president, his achievement, of having made Russia what he wanted. A power that can radiate abroad, influence and restore historical borders. To fail would be to annihilate his twenty years of achievements. Putin will not give up, it is impossible.

This war gives him the opportunity to regain full control of the populationfrom the Russian company. Vladimir Putin is reshaping Russian society. It is this society which, during the Soviet era, had swapped socialism for chewing gum and jeans. In the spirit of the Kremlin, today the Russian company has exchanged its traditional values ​​for iPhones and for TikTok or Facebook. Putin is making a new Russian society. This had already been its goal since the 2010s, with the resumption of control of the media, the opposition, etc. This war offers him the possibility of going even further in his goal..

I believe that Russia has placed the whole of Ukraine in a giant Donbass, that is to say that the concern of the unresolved Donbass is extended throughout Ukraine. Today we find ourselves in the same stalemate as for the Minsk agreements.