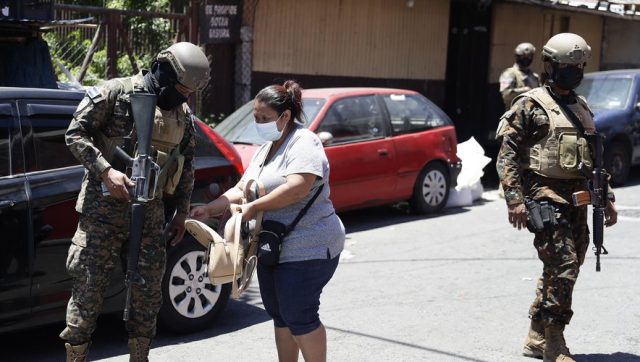 It is a country plagued by acts of unprecedented violence. El Salvador has seen an unprecedented wave of homicides in recent days, attributed to one of the country’s most dangerous gangs, the Mara Salvatrucha. On Saturday, a joint operation was launched by the police and the army against the criminal structure.

We had to react, as the situation was getting out of control in the country. Sunday, March 27, after the numerous homicides that have caused blood to flow all over Salvadoran territory in just 24 hours, Parliament approved the establishment of the state of emergency requested by President Nayib Bukele for a period of a month.

The objective is clearly to stem the extreme violence that hit the country during this dark day, during which 62 homicides were deplored. With this decree, the freedom of assembly is limited and the inviolability of correspondence and communications is restricted. Arrests without a warrant are also permitted.

A significant violation of rights and freedoms but which is justified, according to elected officials, by the unleashing of violence that hit the country on Saturday March 26. The Salvadorian constitution in fact provides that a state of emergency can be put in place “in the event of war, invasion of territory, rebellion, sedition, catastrophe, epidemic or other general calamity, or serious disruption of public order”.

“We are trying to decipher what is happening and who is behind and is financing all of this”, declared the President in particular on Saturday, in remarks reported by Le Monde. who also called a crisis meeting of security officials. Mr Bukele even went so far as to put pressure on the country’s justice, which he hopes will be intransigent, indicating that he would keep an eye on “judges who favor criminals”.

On Twitter, the National Civil Police announced the figure of 62 homicides on Saturday: “This Saturday, March 26 ended with 62 homicides in the country. We will not back down in this war against gangs, we will not stop fighting. capture and bring to justice the criminals responsible for these acts.”

Read:  Why abortion is still debated in the United States

A major operation was launched by the Salvadoran police and army on Saturday, during which several gang leaders accused of being “responsible for the homicides recorded in recent hours” were arrested, as the police said. .

More than 70,000 people are believed to belong to one of the country’s 20 gangs, which mainly live off drug trafficking and extortion. Among them, nearly 17,000 are currently incarcerated according to the authorities cited by our colleagues from Le Monde. In 2021, 1,140 homicides were recorded. To realize the extent of the phenomenon, it is the least violent year since 1992.