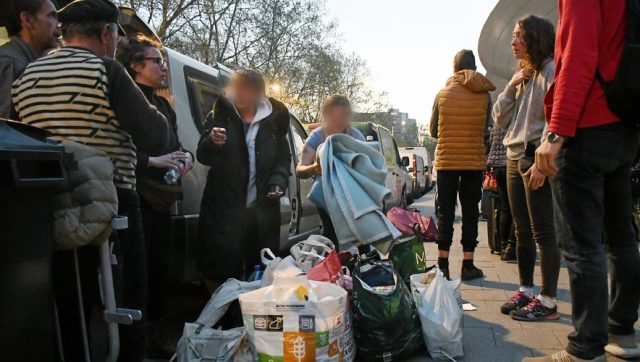 On March 18, at the initiative of a Castelnauvienne supported by several volunteers, three minibuses left Castelnau-le-Lez to transport hygiene products, small medical equipment and non-perishable foodstuffs to the Ukrainian border. The convoy returned this Sunday, March 27 to Montpellier with fifteen refugees.

After thousands of kilometers traveled and four countries crossed, the humanitarian convoy left March 18 from Castelnau-le-Lez for the Ukrainian border, returned this Sunday March 27 to Montpellier.

The operation was launched by Castelnauvienne Elodie Rubio with the support of six volunteers responsible for taking turns to drive three minibuses made available by the town halls of Saint-Mathieu-de-Trviers, Mireval and Le Pouget. The initiative was also supported by the municipality of Castelnau-le-Lez, through a subsidy of 1,500 euros voted unanimously by the municipal council. The opening of a kitty also made it possible to collect 4,500 euros, used in particular to finance fuel.

Read:  DIRECT. Covid: the Constitutional Council will make its decision on the vaccine pass this Friday

On March 18, the vehicles had taken to the road, loaded with hygiene products, medicines, small medical equipment and non-perishable foodstuffs collected from individuals during the two weeks preceding the departure. After a journey through Germany, the Czech Republic and Poland, these donations were deposited at collection points on the Polish-Ukrainian border.

The three nine-seater minibuses enabled the volunteers to make the return trip with fifteen Ukrainian refugees who wanted to reach France. Among them, a mother and her four children, including a motor handicapped teenager, who came by car from Mariupol to the Polish border; a couple in their sixties who had fled their bombed-out city near kyiv with their three dogs; or even a septuagenarian alone, suffering from health problems. All had been previously identified in refugee camps.

Read:  Good plan news The PS5 is finally available! Here is where to buy it

At the end of this trying trip, they were welcomed at the Olympia gymnasium, in Antigone, by the Red Cross and the SOS Ukraine association. Along with the Gambardella gymnasium, this is the second place of accommodation made available by the City of Montpellier, in conjunction with the prefecture, for the reception of Ukrainian refugees.