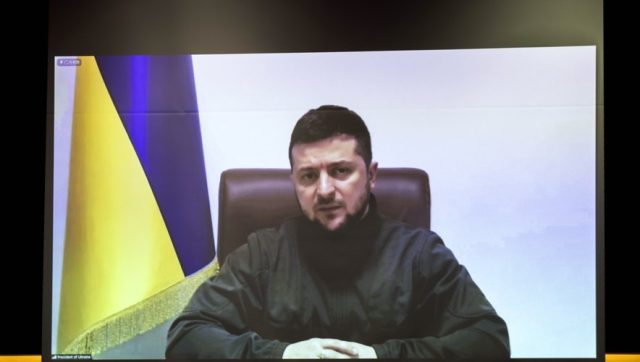 Follow the evolution of the conflict in Ukraine throughout the day this Thursday, March 24.

– 11:15 a.m .: Russia does not want a ceasefire in Ukraine for now according to Josep Borrell

The Russian authorities do not intend to negotiate a ceasefire in Ukraine for the moment because their troops on the ground have not achieved their military objectives, estimated this Thursday March 24 the high representative of the European Union (EU) for External Affairs, Josep Borrell.

“For now, Russia does not want to negotiate anything: what it wants is to occupy the ground,” he said in an interview with Spanish television channel TVE.

“Russia wants to encircle the southern coast of Ukraine up to the border with Moldova (to the west-Editor’s note) and deprive Ukraine of its access to the Black Sea. It only wants to negotiate seriously when it will have secured its position of strength,” he explained.

While the leaders of Western countries are meeting this Thursday in Brussels for three summits (NATO, G7 and EU) in the presence of United States President Joe Biden, Josep Borrell also specified that the EU and its allies would continue to deliver military aid to the Ukrainian army.

“It’s crucial because everything will be decided in the next two weeks,” he observed. The invasion of Ukraine, launched exactly a month ago, is still described in Moscow as a “special military operation” aimed at demilitarizing and “denazifying” the country.

The US Embassy in Moscow received on Wednesday March 23 a list of diplomats considered “persona non grata”, a spokesman for the US State Department said, in what was described by Russian media response to the expulsion by the United States of diplomats belonging to the Russian mission to the United Nations.

“It was said very firmly to the American side that any hostile action by the United States against Russia would provoke a decisive and comparable response,” the agency said. A US State Department spokesperson said: “We can confirm that the US Embassy received a list of diplomats declared ‘persona non grata’ from the Russian Foreign Ministry on March 23.”

“This is Russia’s last unnecessary and unproductive step in our bilateral relations. Now more than ever, it is essential that our countries have the necessary diplomatic personnel to facilitate communication between our governments,” the spokesperson said. word. Neither the State Department spokesman nor Interfax said how many people were affected or when they would have to leave.

– 9:10 a.m.: Volodymyr Zelensky calls on every citizen of the world to demonstrate against the war

Ukrainian President Volodymyr Zelensky called on Wednesday, March 23, all citizens around the world in a video to demonstrate in protest against the war. He encourages everyone to take to the streets to oppose the war.

Before adding: “Meet in the squares, in the street, show yourself and make yourself heard!”

– 9 a.m.: Volodymyr Zelensky will speak this Thursday at the NATO summit

Volodymyr Zelensky, the Ukrainian president will speak this Thursday, March 24 at the NATO summit.

Read:  NASA plans to crash the ISS into the Pacific Ocean in 2031

Western countries will warn Russian President Vladimir Putin on Thursday that his country will pay an “exorbitant” price for the invasion of Ukraine, on the occasion of three summits – of NATO, the G7 and the European Union – which will be held this Thursday, March 24 in the presence of US President Joe Biden.

The day of meetings aims to maintain Western unity and will begin at the Atlantic Alliance headquarters in Brussels, where leaders will agree to strengthen military forces on Europe’s eastern flank.

Alarmed by the prospect of an escalation of the war between Russia and its neighbor after a month of conflict, the 30 members of NATO will also agree to send defense equipment to Kyiv against biological, chemical and nuclear attacks.

The will to take against Moscow new sanctions will be underlined during an emergency meeting of the G7 countries. A summit bringing together the 27 members of the European Union will then be held.

“We must ensure that the decision to invade a sovereign and independent country is seen as a strategic failure that will come at an exorbitant cost to Putin and Russia,” Canadian Prime Minister Justin Trudeau told the European Parliament on Wednesday. .

Russia’s attack on Ukraine has left thousands dead and more than 3.5 million people to flee the country, according to UN data. Ukrainian President Volodimir Zelensky will speak at NATO and European Union summits via videoconference.