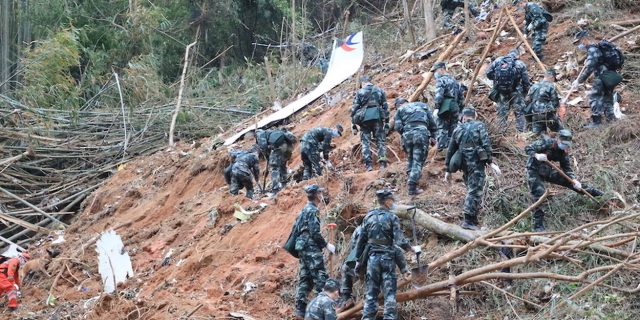 ATfter the crash of the Boeing 737-800 on Monday, March 21, providing a domestic link between Kunming and Canton (Guangzhou), the first information on this flight MU5735 comes from the Chinese authorities and the airline China Eastern Airlines. At the scene of the accident, the debris, which fell on either side of a hill near Wuzhou, was numbered and then photographed before being collected in an aerodrome hangar to try to reconstruct the plane.

We thus learned that there were three pilots in the cockpit whereas the Boeing B737, like the Airbus A320, is designed to be piloted by two, a captain (COB) and a co-pilot (OPL), the mechanic having been replaced by automatics during the 1970s. The CDB occupies the left seat and the OPL the right, both having access to the same flight controls. Between the two, a little behind, can be deployed a third seat behind the center console. If the power levers, the airbrakes, the flaps are within reach, the control stick remains inaccessible to this third man. The captain totaled 6,709 flight hours, the co-pilot 31,769 flight hours, the second 556 hours, all maintaining good family relations, it was specified during the second press briefing from the Chinese authorities. A little out of place, this reference to the family context seems to want to prevent any connection with crashes (Germanwings, LAM Mozambique, Egyptair) caused by suicides. But the number of flight hours of the crew members is also a concern. The captain has five times fewer flight hours than his co-pilot. Could the one in the right seat be an instructor, testing his colleague in the left seat? Behind, a young pilot (556 hp) with little more than a year of after-school experience observes the flight. Was the crew in formation, which is frequent and perfectly legal? The doubt will be removed after questioning the ground staff on departure from Kunming who was able to see who was doing what on board.

One of the two black boxes was found, damaged. The CVR (Cockpit Voice Recorder) if it is readable, will restore the dialogues between the crew members. This recorder was sent to Beijing where a specialized laboratory will attempt to open the CVR and then read its contents. Given the age of the aircraft (2015), the data is stored on computer memories that are less sensitive to shock than the magnetic tapes of yesteryear. The flight recorders are certified to withstand an acceleration of up to 3,400 G (3,400 times the intensity of Earth’s gravity) and a temperature of 1,100°C for one hour. The exchanges between the pilots in the cockpit and those with the air traffic controllers as well as the acoustic environment of the cockpit (conversations, noises, audible alarms) will perhaps make it possible to discover the causes of the drama.

During the three minutes of vertiginous fall of the device, the pilots did not answer the calls of the air traffic control nor launched “mayday”. This absence of SOS shows that the crew was surprised and polarized by an emergency situation where communication with the outside was not a priority. By comparing the trajectory of Monday’s flight with that of the same flight MU5735 the day before, we see that the sudden loss of altitude occurred at the same point as the start of the standard descent towards Canton during the previous flight.

The FDR (Flight Data Recorder), the second black box which has not yet been found, records the values ​​of the aircraft’s parameters (speed, altitude, engine speed, automation engagement and disengagement, control surface position, flight controls…). Depending on the age and type of the aircraft, the number of recorded parameters varies from a few tens to several thousand. The values ​​of these parameters and their changes during the flight can then be represented in the form of curves or tables, and be the subject of calculations relating to the behavior of the airplane. International regulations provide that a first factual report gives information on the circumstances of the accident, the aircraft and its maintenance, the crew, etc. It is often after one or even two years that the final report is published, submitted beforehand to the various players (carrier, aircraft manufacturer, engine manufacturer, equipment manufacturer). This final report includes safety recommendations for the attention of the aviation community aimed at preventing a comparable accident from occurring.