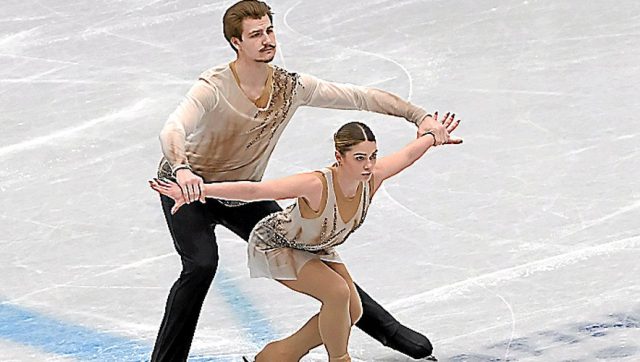 Ukrainian couple Sofiia Holichenko and Artem Darenskyi, who took almost six days to reach Montpellier from Dnipro, in eastern Ukraine, wanted to participate in the World Figure Skating Championships to “show the world that athletes Ukrainians are fighting for their country”, they explained on Wednesday March 23.

“We qualified for the World Championships, we wanted to come here to show the world that Ukrainian athletes are fighting, are there for their country. That we are strong,” said Darenskyi (20).

From Dnipro, “it was a very complicated trip, almost six days. We first went to Romania, then to Italy, and from Italy to Poland, and then here,” said 17-year-old Holichenko. only, whose family lives in kyiv.

“We really felt a lot of support”, thanked the skater, whose father and many friends “are engaged in the army”. Holichenko and Darenskyi were greeted by a standing ovation from the Montpellier public.

We decided with our coach to forfeit the free program. We are not prepared to skate it

Earlier, a minute of applause was dedicated to Ukraine during the short opening ceremony. Blue and yellow ribbon, heart-shaped sticker in the colors of Ukraine, flag on their masks…

Several skaters wanted to make a gesture to express their solidarity. Qualified for the free program scheduled for Thursday evening, Holichenko and Darenskyi however decided not to skate it, for lack of training.

“We decided with our coach to withdraw from the free program. We are not prepared to skate it because we haven’t trained since the Olympics, we took a short break afterwards, and then the war started,” said Holichenko.

The Ukrainian couple already knows that they will not be able to return to Dnipro after the Worlds, but will go to Poland, to Torun, where a club has offered to welcome them.