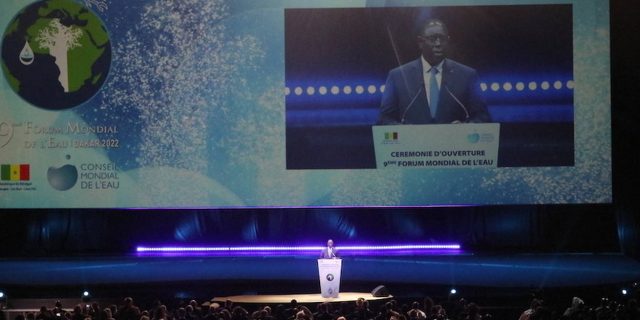 ISenegalese President Macky Sall kicked off the 9and World Water Forum at the Dakar Arena, in Diamniadio, near Dakar, in order to “sound the alarm” on the “scarcity of water resources” in the world, particularly in Africa. Macky Sall, also the current president of the African Union, underlined in his opening speech that the forum was meeting in Senegal “while the scarcity of water resources and the degradation of the environment continue to worsen”. For the Senegalese head of state, who quotes a UN report, “the situation is not reassuring”, in particular because “two out of five people in the world live in regions where water is scarce”. “Everything suggests that, if nothing is done, the situation will go from bad to worse,” he said, assuring that the 9and World Water Forum was “an opportunity to sound the alarm on the seriousness of the situation”. According to the United Nations, only one in four Africans has access to drinking water.

While this forum, organized for the first time in West Africa since 1997, takes place until March 26 with the theme “water security for peace and development”, and in the presence of many leaders Africans and Audrey Azoulay, the Director General of Unesco, a stakeholder in the organization of the forum, Macky Sall proposed on the political level that “the G20 expand and broaden its composition”. Why ? “Given the global challenges […]the time has come for a body like the G20 to pay attention to water-related issues, as the World Bank and other international institutions have been doing for decades. […] The AU could thus become a member” because “Africa has more than a quarter of the member countries of the United Nations”, underlined the President of Senegal.

In a column published on the eve of the meeting on the forum’s official website, the Senegalese leader gave voice by pleading for the international community to place “water at the heart of the action of multilateralism and international policies to build effective response mechanisms in the face of multifaceted crises and for the construction of a resilient, prosperous and stable post-Covid-19 world”. For Macky Sall, it is necessary to act quickly in order to find and strengthen the mechanisms of financing and governance of water, to give all its place to innovation in terms of sanitation or even to solve the challenges posed by the problem of water. drinking water in rural areas and finally supporting scientific research to maximize the use of water and the reuse of wastewater.

Read:  Islamic State vows to 'avenge' the death of its former leader

Senegal on the front line

Senegal, the host country of this event, is concerned in more ways than one by these multiple challenges. Since the end of the 1960s, the country has been regularly subjected to periods of intense drought. A phenomenon that is accentuated with global warming. In Dakar alone, the capital – often described as one of the extremes – for example, many citizens struggle to access water, despite the authorities’ efforts to meet the demand of the 4 million inhabitants. The city is also regularly confronted with major flooding.

The daily Investigation published a detailed file titled “Trouble Waters” and which looks back on the situation in Senegal, a country whose water reserves are set to run out very quickly, “the level of current withdrawals should increase by 30 to 60% by by 2035, increasing water stress and testing the ability to meet the demands of a rapidly urbanizing population. Extreme events related to water and its pollution are already costing Senegal more than 10% of its GDP each year”.

At the same time, Senegal is also cited as an example for its involvement in the management of water basins through the Organization for the Development of the Senegal River (OMVS) and the Organization for the Development of the Gambia River ( OMVG), two sub-regional cooperation institutions of which the host country of the summit is a member. The OMVS was awarded, on Monday evening, the Hassan II Grand Prize for Water, a distinction created in 2002 jointly by the Kingdom of Morocco and the World Water Council as sovereign of the sovereign Hassan II and its actions in favor of international cooperation and the preservation of water resources. The prize is worth $100,000 to $500,000. According to the jury, the West African organization, which brings together Mali, Mauritania, Senegal and Guinea, was honored for its work in favor of the “realization of water and food security” of the large cross-border basin. But also for its action for “peace, prosperity and territorial development” of its member countries.

“The sustainable management of water resources is a major challenge for the 21stand century. This forum should make it possible to strengthen multilateral actions in this area. Managing water better involves educating, training and raising awareness. I call for a strong commitment from States,” said Audrey Azoulay in a recent press release.

Unesco wants to highlight the potential of groundwater

The debates are opening in this forum, when Unesco has just published a report highlighting the potential of groundwater likely to generate social, economic and environmental benefits, provided that they are managed in a sustainable way. Indeed, Unesco warns in this 272-page report, entitled “Groundwater: making the invisible visible”, that groundwater resources “too often go unnoticed or are ignored” and the world’s reserves are often poorly managed, undervalued and exposed to the risk of pollution even though they represent almost 99% of the fresh water reserves on Earth. Groundwater provides half of the volume of water withdrawn in the world, according to Unesco. They are used by the world’s population for domestic purposes, for agriculture and industry.

Unesco also points out that water consumption should increase by an average of 1% per year over the next thirty years. In this context, groundwater could, for example, offer “solutions for mitigating climate change”, according to the report, which states that aquifers “have a unique buffering capacity, capable of limiting the impact of climate variations”. In particular, the report recommends irrigation via solar-powered groundwater pumping systems.

From now on, the challenge is to achieve coordination on a global scale. The Unesco report calls for better “governance” to manage groundwater resources, with “basic knowledge, institutional capacity, laws, regulations and their enforcement tools, policies and planning, stakeholder participation as well as appropriate funding”. Access to groundwater resources comes up against a problem of expertise, particularly in sub-Saharan African countries, which require support. The document thus encourages governments to “create and enrich a knowledge base dedicated to groundwater” in order to share data. In particular, it calls on the oil and mining industries to share their “data, information and knowledge” for the benefit of those involved in groundwater management.