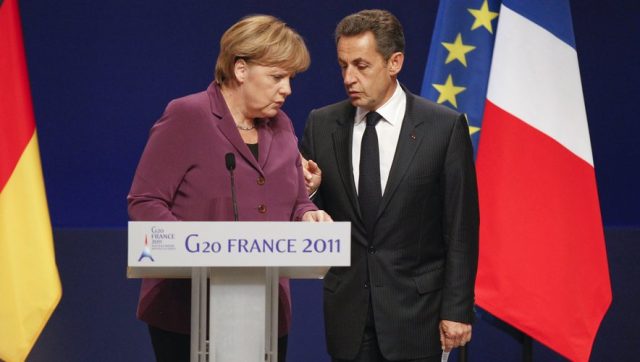 The former French president and the former German chancellor were the target of criticism from Volodymyr Zelensky after the massacres committed in Boutcha (Ukraine) by the Russian army. The Ukrainian leader criticizes the two heads of state for their decision not to accept Ukraine’s integration into NATO in 2008.

10 years after the Sarkozy presidency, the former French president is the target of criticism from the Ukrainian regime. Angela Merkel, the former German chancellor is not spared either. Volodymyr Zelensky denounces their reproaches for their decision not to integrate Ukraine into the NATO summit in 2008.

Germany and France in the Ukrainian sights

“I invite Mrs. Merkel and Mr. Sarkozy to visit Boutcha and see what the policy of concessions towards Russia has led to,” denounced the Ukrainian president in a video published this Sunday evening. He calls on the two ex-leaders to come and see for themselves the “tortured and killed Ukrainians” in this martyred city near kyiv.

Why then did Volodymyr Zelensky decide to specifically target these two former rulers? The warlord president of Ukraine actually refers directly to the NATO summit of 2008, as reported by our colleagues from the Parisian. Indeed, during the meeting of NATO powers, France and Germany were opposed to the entry of Ukraine and Georgia into the organization of the North Atlantic Treaty. The two European countries were advancing while Ukraine was not yet ready to enter the alliance.

A Sarkozy presidency favorable to Putin?

But for Zelensky, this decision only served to please Russia, in order to avoid tensions with Europe. Several geopolitical experts even mention a greater opening of international relations with Russia under the Sarkozy presidency.

“France’s current position with regard to Russia is all the more surprising since it apparently goes against two firmly rooted presidential convictions – Atlanticism and the desire to stand out from its predecessors”, analyzed Arnaud Dubien, director of the Franco-Russian observatory in an article on “Nicolas Sarkozy and Russia, or the triumph of Realpolitik”.

Read:  War in Ukraine: “Can we get used to the shooting? »

On Merkel’s side, her spokesperson reacted and assures that the former chancellor “assumes her decisions from the 2008 NATO summit in Bucharest”.