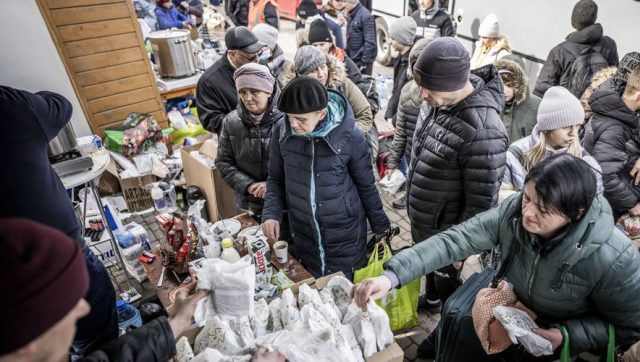 Since this weekend, the mobilization to help the Ukrainian people has been massive. We have identified some actions and initiatives.

The mobilization continues. Since yesterday, the House of International Relations welcomes the association SOS Montpellier Ukrainewhich is intended to collect basic necessities and have them transported directly to the border between Poland and Ukraine.

“We need it all (food, clothes)but mainly products for babies such as diapers, bottles, milk, wipes”, says volunteer Lyudmyla. The organizers are also looking for medical equipment and are calling on Montpellier hospitals. “We absolutely need incubators for the children born under the bombs in the shelters.”

For the soldiers, it is the pharmacies that Lyudmyla wants to alert. “ We need bandages, burn ointments, first aid equipment, defibrillators, etc.”

Note that the bus which was to pass in Montpellier at Près-d’Arènes today at 9 a.m. is already full and has taken the direction of the border. For the moment, the date of a next departure has not been fixed.

The Department of Hérault also claimed to be at the side of the Ukrainian people. He “identify families with reception capacities and will do everything possible to welcome Ukrainians with dignity.” For any information, contact sosmontpellierukraine @gmail.com.

The association of Saint-Jean-de-Védas Baskets of Hope will offer hygiene products but will also serve as a relay point to centralize the reception of donations in Montpellier and the surrounding area. A first semi-trailer will leave on Monday March 7, then a second one a week later for Ukraine. Contact info: 06 15 61 09 84. Mail: lespaniersdelespoir34 @gmail.com.

In Saturargues, the municipality is setting up a collection of basic necessities. A permanence is held from 6 p.m. to 8 p.m., in the Jean-Bosco room located just behind the church and at the town hall during opening hours.

From Monday evening, the Maison Carrée is decked out in blue and yellow, just like the Hôtel d’Agglomeration. Alongside these symbolic gestures, the town hall is organizing, in its social centers, in collaboration with the Ukraine Occitanie Alliance, a collection of essential and medical products, in particular to help two hospitals in the west of the country, bombed and missing everything.

The City of Béziers organizes fundraising operation (basic necessities, foodstuffs, etc.) to support Ukrainians. Donations have been received since Monday at the Raoul-Barrière stadium, 7 days a week, from 8 a.m. to 8 p.m. “We had to first express our horror of Putin’s responsibilities and then do things,” explains Mayor Robert Ménard, who bluntly condemns the Russian invasion. In addition, the Ukrainian flag was hoisted on the pediment of the Town Hall.

“In solidarity with the Ukrainian people, the facade of the Town Hall will be illuminated in blue and yellow from the evening of Wednesday, March 2,” said the communication department of the municipality of the singular island. The City also announces that it will participate in all the support initiatives launched at the local level, like a concert that should be organized by a Ukrainian pianist living in Sète. The City intends to join various national donation transfer protocols for Ukraine, such as the one put in place by the AMF (Association of French Mayors).

After having initiated a rally in front of the town hall, this Monday, the municipality of Alès organizes, as of this Tuesday, a “Operation Solidarity Ukraine”, a collection of basic necessities sent to Ukrainian refugees, on the Polish border. It is also possible to make a financial donation by depositing a check, payable to Alès Cévennes Solidarité, an association created during the floods of 2002, at Mairie Prim’.

The money will then be given to a structure recognized as being of public utility or to the Fondation de France. The Ukrainian flag also flies on the facade of the town hall and the yellow and blue colors will soon be projected, at night, on the facade of the Hup, the one-stop shop for entrepreneurs in downtown Alès.

A rally in support of the Ukrainian people is organized Place Mallet in Bagnols-sur-Cèze this Wednesday at 6:30 p.m.. The City provides the number of its municipal social action center (04 66 39 65 00) to its inhabitants of Ukrainian origin to provide them with help and support. On Tuesday evening, the facade of the Hôtel de Ville will be lit up in blue and yellow.

The Local Union CGT Lodève – Clermont with the Mouvement de la Paix and the local section of Arac call for a rally this Wednesday at 6 p.m. in front of the Lodève sub-prefecture asking for “an immediate ceasefire and that political and diplomatic solutions be found quickly”.

Monday evening, more than 300 Millavois gathered in support of the Ukrainian people in front of a town hall dressed in blue and yellow. “It’s a crime against freedom,” said Emmanuelle Gazel, mayor of Millau, in a speech filled with emotion.