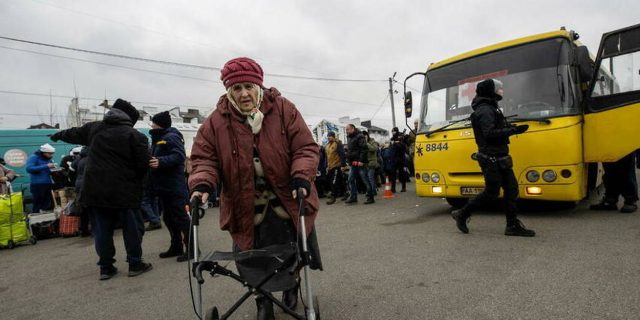 Ihe United States on Wednesday hardened its tone against Russia, accused of war crimes following the Boutcha massacre and multiple abuses by the Russian army. A new set of sanctions, promised as “devastating” for Moscow, has been put in place. At the same time, Ukraine called on the population to evacuate the east of its territory, now a priority target of the Kremlin. “What is happening is nothing less than major war crimes. Responsible nations must unite to hold those responsible to account, US President Joe Biden has said in Washington, promising to “stifle for years” Russia’s economic development.

The new US measures prohibit “all new investment” in Russia and will apply the toughest possible constraints to the major Russian banks Sberbank and Alfa Bank, as well as to several important public companies. They also target the daughters of Russian President Vladimir Putin, Maria Vorontsova and Katerina Tikhonova, aged around 30. These new sanctions were to be decided in coordination with the G7 and the European Union, pressed by kyiv to do more against Moscow, in particular in terms of energy sanctions, a subject which divides the EU, on which certain Member States are very dependent. Russian deliveries.

The United Kingdom immediately announced a ban on all investment in Russia and sanctions in finance and energy. European Council President Charles Michel said on Wednesday that the EU should “sooner or later” impose sanctions on Russian oil and gas.

“We cannot tolerate any indecision after what we have been through,” said Ukrainian President Volodymyr Zelensky, addressing the Irish Parliament. He was referring to accusations against Russia of abuses against civilians, particularly in the town of Boutcha, near kyiv. On Tuesday, he had already launched an impassioned appeal to the UN Security Council, summoned to act “immediately” in the face of the “war crimes” of which he accuses Moscow.

Zelensky had the diplomats project dramatic images filmed in localities recently evacuated by the Russian army showing, according to kyiv, many corpses of civilian victims of violence. Charges rejected by Moscow, Vladimir Putin denouncing Wednesday a “gross and cynical provocation” of Ukraine in Boutcha. But Germany, very dependent on Russian gas, considered that Moscow’s thesis of a Ukrainian staging was “not tenable” in view of the satellite photos which were broadcast.

China, very cautious about the conflict, for its part evoked “deeply disturbing” images, but recalled that “any accusation” must “be based on facts”. Pope Francis lambasted “an ever more horrible cruelty (including) against civilians, women and children”. The Ukrainian authorities claim to fear the discovery of other massacres and that that of Boutcha is “not the worst.

Militarily, they fear a large-scale Russian offensive in the East, in the areas they control near the Russian border. Ukrainian Deputy Prime Minister Iryna Vereshchuk also called on the population of these regions, including the large city of Kharkiv, on Wednesday to “evacuate (…) now”, while there is time, under penalty of “ risk death”.

On the diplomatic level, the Hungarian nationalist Prime Minister, Viktor Orban, just re-elected and close to Vladimir Putin, announced on Wednesday that he had suggested to the Russian president to declare an “immediate ceasefire”. “He said yes, but with conditions,” he added.

The conflict shows no signs of abating, and NATO returned to it during a meeting which opened on Wednesday in Brussels of the foreign ministers of the member states of the Alliance. “War can last a long time, several months or even years. And that is why we must be prepared for a long journey in terms of supporting Ukraine, maintaining sanctions and strengthening our defenses,” said Secretary General Jens Stoltenberg in the opening.

NATO only intervenes to defend its members. Ukraine is not a member, but nothing prevents the thirty countries of the Alliance from providing assistance. A small group of Ukrainian soldiers who were in the United States before the Russian invasion of Ukraine are being trained in the use of the Switchblade killer drones that Washington provides to kyiv, a Pentagon official said on Wednesday. And Portugal has announced that it will “soon” send additional military equipment to Ukraine.

On the ground, Moscow is pursuing its new strategy: concentrating efforts on Donbass, the vast mining basin in eastern Ukraine partly in the hands of pro-Russian separatists since 2014.

AFP journalists noted regular shelling on Wednesday in Severodonetsk, 100,000 inhabitants before the conflict, the easternmost city held by the Ukrainian army in the Donbass, very close to the front line. Some residents ventured out when the shelling stopped for a few minutes, before taking cover when the strikes resumed. “We have nowhere to go, it’s been like this for days,” commented one of them, Volodymyr, 38, in front of the spectacle of the burning building on the other side of the river. Street.

Read:  The Witcher: a new game in the witcher's universe planned for this year?

According to the regional governor, ten buildings, a shopping center and nearby garages were affected, which caused a major fire. In Vougledar, a town of 15,000 people 50 km southwest of Donetsk, two civilians were killed and five injured in the shelling of an aid distribution center, according to Donetsk region governor Pavlo Kirilenko.

A little further, Ukrainian forces were preparing to defend a road linking Izium, recently taken by Russian forces, to the neighboring cities of Sloviansk and Kramatorsk, the de facto capital of the east controlled by kyiv. Cluttered with anti-tank obstacles, the road is surrounded by trenches dug with bulldozers. Artillery pieces and other more or less buried armored vehicles dot the surroundings and the forest is full of shelters and other equipment. Ukrainian logistics are still targeted. According to the Russian Ministry of Defense, five fuel depots which supplied the Ukrainian forces in the regions of Kharkiv and Mykolaiv (South), as well as in Donbass and near Dnipro (East) were destroyed overnight by missiles . Russian airstrikes hit 24 Ukrainian military sites in total, according to the ministry.

“My mother or my grandchildren”

Russian forces are consolidating their positions on the coastal strip along the Sea of ​​Azov in southern Ukraine to connect the Donbass regions to the Crimean Peninsula, annexed by Moscow in 2014. Fighting is focused on the port city of Mariupol. Some 120,000 of its inhabitants are stranded there, authorities say, and the evacuees, after a harrowing 200 km journey, find themselves in reception centers in Zaporozhye, inland, where an ICRC convoy arrived on Wednesday with more than 500 refugees.

People who arrived before told AFP the hell of Mariupol, like Angela Berg, 55, who left everything in this city, including her mother, too old for the journey. “A man armed with a submachine gun forced us to lie on the ground in front of our 12-storey building, on pieces of broken glass. Then they started shooting at it with tanks, the building caught fire. And the man with the submachine gun was shooting at people trying to get out. They didn’t let us collect anything until it was all burnt down. Worse, she explains that she had to abandon her mother and her invalid sister-in-law to save the rest of her family, including her sick three-month-old granddaughter. “It’s the hardest decision I’ve ever made. I had to choose between my mother and my grandchildren. »