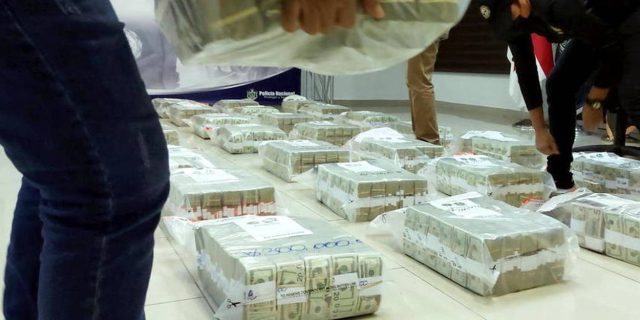 Sease record! Authorities in Panama found $ 10 million in cash on Thursday, December 2. Stemming from drug trafficking, the booty belongs to a criminal group closely linked to the Colombian cartel Clan del Golfo. “This large sum of money belongs to the dismantled criminal organization which works with the criminal group known as Clan del Golfo,” the prosecution said in a statement.

“This is undoubtedly the most important seizure of money from drug trafficking in the history of the country,” Attorney General Javier Caraballo told reporters. The money was found in bags concealed in three hiding places of a house in the town of Nueva Providencia, in the Caribbean province of Colon (North) during a police operation which led to the arrest of 57 people. . Ten firearms and thirty-eight high-end vehicles were also seized during the operation in which the American Anti-Drug Agency (DEA) participated.

Twelve hours to count the money

Authorities took more than 12 hours to collect the money and count it with automatic bill counters, some of which broke down in the face of the scale of the task. Among those arrested are nine officials, so five police officers, who are suspected of having “received, monitored and concealed large quantities of drugs from Colombia”, according to the prosecution.

The drugs were then sent, by order of the Clan del Golfo, to the United States, the world’s largest consumer of cocaine. The Clan del Golfo controls nearly a third of cocaine production in Colombia. Its leader, Dairo Antonio Usuga, known as Otoniel, was captured on October 23 by Colombian authorities.