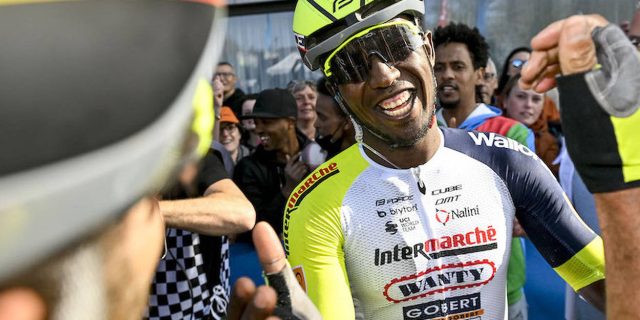 VS’is a first, and what a first! Biniam Girmay, a 21-year-old Eritrean, wrote cycling history on Sunday March 27 by winning the 84and edition of Ghent-Wevelgem, a classic cycle race, ahead of Frenchman Christophe Laporte.

After 249 kilometres, Girmay was the fastest of a group of four riders. “It’s just amazing, I couldn’t expect so much! Exclaimed the young rider from the Intermarché team, which he joined last spring after starting his professional career in 2020 with French team Delko.

“I suffered a bit on the cobbles, it was really not comfortable. Afterwards, I felt better and better and I regained places. In the sprint, I was dealing with strong riders, but I had confidence,” added the winner of the day, who was discovering the roads of Ghent-Wevelgem.

Representing cycling on the rise symbolized by the organization of the 2025 Road World Championships in Rwanda, the rider from Eritrea – the country in sub-Saharan Africa at the forefront of cycling – smiled before mounting the ceremonial podium: “It will change a lot of things for my future, I hope also for that of the African runners. »

In the past, none of his compatriots, most often climbers, had managed a performance of this level. Not even Daniel Teklehaimanot, the Eritrean cycling pioneer who briefly wore the mountain polka dot jersey in the Tour de France in 2015.

Winner at the end of January of a race in Majorca (Spain), Girmay, who joined the WorldTour level only last summer, has progressed over the races. Noted by his 12and place in Milan-Sanremo, he asserted himself last Friday in the E3 Classic (5and), the repetition of the Tour of Flanders, in which he will not participate next Sunday. He planned to return to his country before returning to Europe in view of the Giro, the Tour of Italy, from May 6 to 29, 2022.

One hell of a race

His triumphant sprint on the sunny Wevelgem road, near the French border, concluded a race dominated by the Jumbo team, which could not however make the decision in the various “mountains”.

The Belgian champion, Wout Van Aert, forced the pace on the third and final ascent of the Kemmel, 34 kilometers from the finish, and took with him a small group of strong men (Asgreen, M. Pedersen, Laporte, Van Baarle, Kragh Andersen, Mohoric then Benoot) without managing to create a sufficient gap. “I made a mistake, I should have started the sprint. Opportunities like this, we don’t have them every day, ”lamented Laporte, very disappointed.

But the Frenchman, second Friday of the E3 Classic, concluded, fair play: “I was a little surprised by the start of Girmay, he came out very quickly and made the hole. It’s very good for him! »