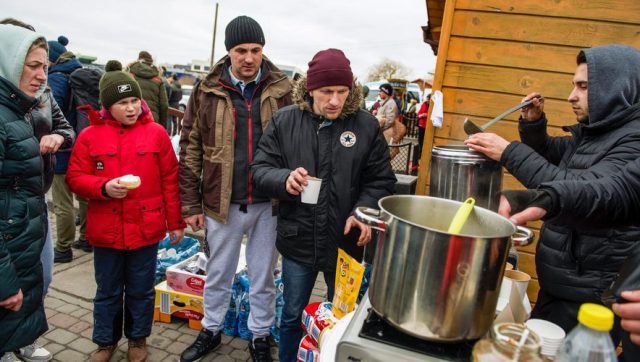 Nearly 100,000 Ukrainians have already reached Poland, they are at least 10,000 in Romania, 16,000 in Moldova, a massive flight which leads to traffic jams at border posts.

Twelve hours of waiting at the Polish border, almost 30 kilometers of queuing for Ukrainian vehicles who leave a whole life behind them and find themselves by the thousands at the Medyka checkpoint.

Since Thursday February 24, 100,000 Ukrainian refugees have already reached Poland, located on the territory of the European Union and NATO.

The first arrived at Przemysl station on Friday, February 25, in the south-east of the country who were expecting “a wave of refugees”in the words of Polish Interior Minister Mariusz Kaminski, on Thursday.

And 10,000 to 20,000 in Romania, where a strange ballet takes place at the border post of Siret: the Ukrainians flock there when leaving their country, the Romanians too, to offer a meal, a tea, a vehicle to drive the families in exile in a hotel in the nearest large town, Suceava, 50 km away. And sometimes offer them hospitality in their own homes.

“We tried to escape from Kiev for several days before finding the right way. I am very worried because with the general mobilization, my husband had to leave us at the border and go back to Ukraine. I am nervous for our future , all this disgusts me…”, is in despair Julia, interviewed by France Info. With her two children aged 4 and 8, she will be able to breathe in the vacant apartment of a benevolent soul.

Read:  War in Ukraine: Brigitte Bardot rants against the "fear in the stomach" of Westerners

Gérald Darmanin and his 26 interior minister colleagues from the European Union are meeting this Sunday, February 27, to discuss the wave of refugees from Ukraine; Foreign Minister Jean-Yves Le Drian announced the meeting on Friday.

According to the UN, the migratory wave could reach 5 million people. Objective of the meeting of 27: “To discuss concrete responses to the situation in Ukraine,” tweeted Gérald Darmanin on Friday.

Ukrainians have also arrived in Hungary, Slovakia and Moldova, which shares 650 km of border with Ukraine, and where 16,000 migrants passed through in 24 hours after the start of the Russian offensive.

In France, mayors of large cities (Lyon, Lille, etc.) have said they are ready to welcome refugees, but we are still stuck with declarations of good intentions, issued last Friday by Emmanuel Macron: France “will take his share”.

In Champagnac-la-Noaille, in Corrèze, Béatrice Beffare testified to France-Bleu Limousin of her impatience to know her Ukrainian “children of heart”, received for twenty years in their foster family, safe and sound. They just know that the youngest, Yarina, 19, mother of an 18-month-old baby, managed to flee Kiev to try to cross to Poland. Since then, she has had no news and is worried: “If we have to pick them up in Belgium or Germany, we’ll go, I can assure you!”

Leaving Pézenas to find her son Aurélien, stranded in Ukraine, Dominique arrived in Poland but cannot cross the border to find her son, indicates her daughter, who remained in Hérault while another child of the siblings, Anthony, accompanies the mother.

With his wife, Aurélien had gone to visit his in-laws, who live one kilometer from the Hostomel military airport, near Kiev. The couple was to return this Monday, February 28. He is now trapped in Ukraine and lives in terror.

“They spent last night in the noise of helicopter ballets,” reports Vanessa, Aurélien’s sister. The border is far, “they are 600 km away”. And the anxiety rises. “We have no choice but to wait, I try to stay positive,” testifies Vanessa, convinced that her mother and brother will stay there until the family is reconstituted.