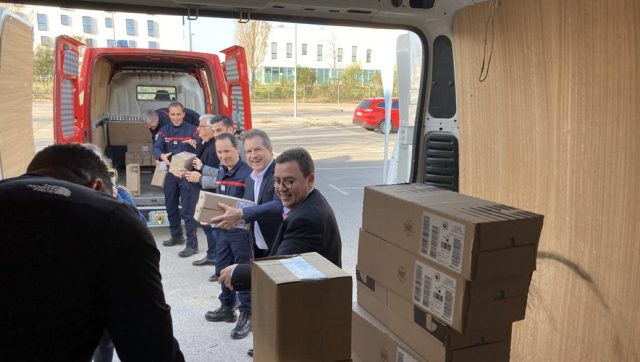 Batteries and lamps. Companies have been asked to participate in the solidarity effort around joint CCI and Sdis logistics, presented this Tuesday, March 22.

€3,000 worth of lamps supplied by Interport de Lattes, €6,000 worth of batteries entrusted by the Intermarché de Saint-Gély and Mauguio or even 400 boxes put into production by Ondupack, at Bosc… André Deljarry, president of the CCI, was delighted this Tuesday at the time of presenting the generosity efforts of the companies of the Hérault.

“Solidarity is such that Ukraine is now overwhelmed by trucks transporting all kinds of products, which are no longer necessarily necessary at the present time”, he explains. So in conjunction with the dedicated unit led by the prefecture, “very specific needs” have been identified.

Read:  Sergei Pugachev: "The idea of ​​a putsch against Putin seems unlikely to me"

Among which therefore this need for batteries and lamps. “In forty-eight hours, nearly €25,000 of goods were released by the companies.” Now charge the Sdis firefighters, represented on Tuesday by Colonel Sylvain Besson, to send them to their destination.

A national organization, via the airports of Colmar and Roissy. “Ten firefighters from Hérault are currently there. Colonel Éric Flores is on a European mission in Moldova. All this allows us to establish contacts. Thanks to this, donations will be able to arrive on site and will go to the population. “, confided Sylvain Besson.

On the Chamber of Commerce side, which announced on this occasion the launch of the Solidarity Ukraine Hérault operation, the action does not stop there, in particular to respond to a logistical problem concerning the lack of space to store donations.

Read:  War in Ukraine: kyiv accuses Russia of wanting to "destroy the Donbass"

“A call for companies to store and pack pallets that need to be transported to Ukraine” is therefore launched. Just like a call for financial donations, via the herault.cci.fr website.