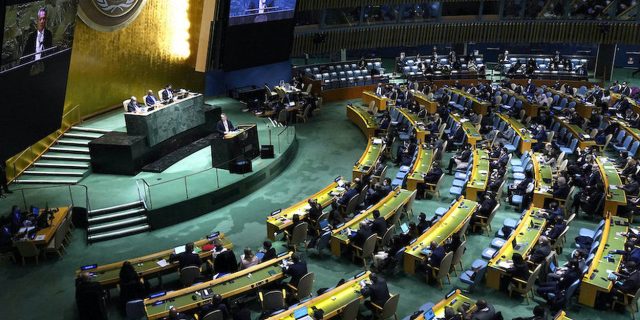 Ihe UN General Assembly adopted a resolution on Wednesday, March 2, which “demands that Russia immediately cease the use of force against Ukraine”, in a vote overwhelmingly approved, five opposing it and thirty – five, including China, abstaining, out of the 193 members of the international organization. The five countries that voted against are Russia, Belarus, North Korea, Eritrea and Syria. General Assembly resolutions are non-binding, unlike Security Council resolutions. But they have an important symbolic significance in terms of international politics. While until now it seemed difficult to sound out Africa, after the vote, divisions appeared in broad daylight. And yet, it is an understatement to say that the voice of Africa counts in the United Nations General Assembly, with the continent occupying 25% of the seats. Who voted for or against and who abstained? Response items.

The reasons for a scattered vote

While the resolution was passed by an overwhelming majority with 141 voting in favour, a number of African countries were among the 35 that abstained in the vote: South Africa, Mali, Mozambique, Central African Republic, Angola, Algeria, Burundi, Madagascar, Namibia, Senegal, South Sudan, Sudan, Uganda, Tanzania and Zimbabwe. Eritrea, meanwhile, was one of only five countries to actively vote against the resolution, alongside Russia, Belarus, Syria and North Korea. Among these countries, many are long-standing allies of Moscow, such as Algeria. Generally, the closer the military, economic and political ties with Russia, the more subdued African responses are likely to be, experts say.

In other cases, the burning news of the war in Ukraine and above all the role of NATO is reminiscent of the divisions which dominated the intervention of the organization under the mandate of the Security Council of the United Nations. UN against the regime of Muammar Gaddafi in 2011. For several African states, this operation had blurred the lines between “the protection of civilians” and the overthrow of the regime. For the latter, the debate is still topical today.

For another category of countries, the rapprochement with Russia is more recent, so they have every interest in sparing their new ally. Indeed, in recent years Russia has forged a number of military alliances with African governments facing violent insurgencies or political instability, including Libya, Mali, Sudan, the Central African Republic and the Mozambique. The importance of these links seemed to influence the way these countries react and vote. Illustration by two cases: lOn the eve of the Russian invasion last Wednesday, Mohamed Hamdan Dagalo, deputy head of the Sudanese military junta, led a delegation to Moscow to advance the agreement on the creation of a Russian naval base in Sudan. Sheltered in Port-Sudan, it will be able to accommodate up to 300 Russian soldiers as well as four military ships, including a nuclear-powered ship. In the Central African Republic, it was a statue erected to celebrate the men of Wagner, who made the front page.

Read:  Far Cry 6: a season pass as nostalgic as it is essential?

The “Tradition of Non-Alignment” card

On the other hand, the choice of abstention from a country like Senegal surprised more than one. “The President of the Republic expressed his serious concern about the situation in Ukraine. (…) he reiterated Senegal’s attachment to respect for the independence and sovereignty of States, as well as to the application without discrimination of the rules of international humanitarian law, particularly in situations of conflict. He also reaffirmed Senegal’s adherence to the principles of non-alignment and the peaceful settlement of disputes,” reads a statement issued by Dakar, following a Council of Ministers held on Wednesday. And for good reason, the explanations put forward by the country remain consistent with a historical position of Africa, falling under “the tradition of non-alignment”, in international conflicts, inherited from the Cold War.

According to some observers, Senegal also displays its reserve following the numerous testimonies of racist acts against African nationals disembarked from trains or buses, or turned back at the borders of the European Union. Senegalese President Macky Sall, currently head of the African Union, raised his voice by describing as “shocking and racist” the possibility of applying “unacceptable different treatment” to African refugees fleeing the war in Ukraine, in a press release published on February 28.

Other African countries, including Cameroon, Togo and Morocco, did not take part in the vote. The Cherifian kingdom had to explain itself, through a press release. Morocco said it had taken a “sovereign” decision which “cannot be the subject of any interpretation in relation to its position of principle concerning the situation between the Russian Federation and Ukraine”. While ensuring “follow with concern and concern the evolution of the situation” and “regrets the military escalation”. Military escalation: the expression used by the kingdom instead of “invasion” commonly used since last Thursday has caused a reaction, especially on social networks. Despite everything, the Kingdom recalls its “strong attachment to respect for the territorial integrity, sovereignty and national unity of all United Nations Member States”, to the “settlement of disputes by peaceful means and according to the principles of international law”, and calls for “the intensification of dialogue and negotiation”.

However, we should not forget too quickly that 28 African countries voted in favor of the UN resolution. On February 22, even before Russia launched its invasion of Ukraine, the Kenyan UN envoy, Martin Kimani, sent a scathing response to Moscow, din a direct allusion to European colonialism. “Kenya and almost all African countries were born out of the end of empire. We have not drawn our borders ourselves. They were drawn in the distant colonial metropolises of London, Paris and Lisbon with no regard for the ancient nations they separated,” he told delegates. According to him, African nations have chosen to look forward rather than “forming nations that always look back in history with a dangerous nostalgia”. “We have chosen to follow the rules of the OAU (Organization of African Unity) and the United Nations Charter, not because our borders satisfied us, but because we wanted something bigger forged in peace”, added Martin Kimani. This message was widely welcomed and relayed around the world.

Africa bears the brunt of Russia’s strategy on the continent

These exposed divisions are also the result of the strategy deployed by Russia in recent years on the continent. Russia seems very selective in relation to the countries with which it establishes links, with a choice to invest in countries often led by the military, or with strong natural resources. An approach which contrasts with China, and which favors the individual positions observed these days on the case of Ukraine. And yet, the African continent, through the voice of the African Union, seeks to weigh within the United Nations, and on many occasions, the AU has asserted respect for international standards of sovereignty and territorial integrity as an integral part of Africa’s objectives to weigh on the international scene.