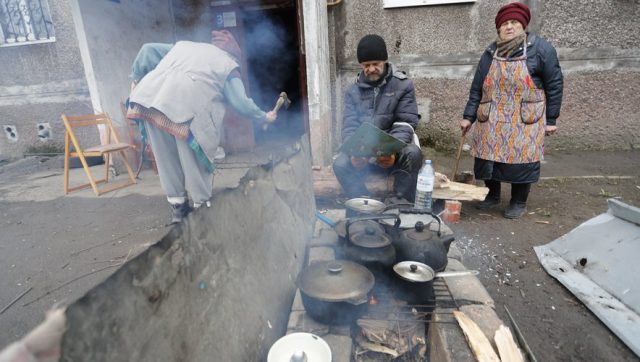 Missiles hit Lviv, the main city in western Ukraine, on Monday, killing seven, and explosions rocked other cities, Ukrainian authorities said, with Russian forces continuing their bombardment after claiming virtual control. total from the strategic port of Mariupol, in the south of the country.

Pushed back by Ukrainian resistance in the north, the Russian army concentrated its ground offensive on the Donbass while continuing missile strikes towards other regions of the country, notably the capital, kyiv.

Lviv Mayor Andri Sadovy said seven people were killed and 11 others injured when missiles fired earlier in the day at the city, located just 60 kilometers from the Polish border. According to the governor of the region, they left seven dead and 11 injured.

In kyiv, a Reuters reporter heard a series of explosions near the Dnieper River. Local authorities have not yet provided official information on their origin.

According to the Suspilne media, two people were injured in attacks in the Dnipropetrovsk region in the south of the country.

Russia denies targeting civilians and has dismissed what Ukrainian authorities are presenting as evidence of atrocities, denouncing a maneuver aimed at derailing peace talks.

Moscow presents its offensive in Ukraine as a “special military operation” aimed at demilitarizing its neighbor and eradicating nationalist groups presented as dangerous. The West and kyiv accuse the Russian President, Vladimir Putin, of unjustified aggression.

On Monday, the Russian Defense Ministry said it had destroyed 16 military installations in Ukraine, including five command structures, a fuel depot and three ammunition depots.

He added that the Russian air force had launched strikes against 108 Ukrainian armed forces assembly sites and that artillery had targeted 315 military targets in the past few hours.

Ukrainian Prime Minister Denys Shmyhal said Ukrainian soldiers entrenched in the rubble of Mariupol port continued to resist on Sunday after an ultimatum from Russia to lay down their arms.

“The city still hasn’t fallen,” he told US television channel ABC, adding that Ukrainian soldiers still there were still fighting and still controlling parts of the city.

Russian state television broadcast footage of two Britons taken prisoner by Russian troops while fighting alongside Ukrainian forces in Mariupol, a video in which the two men ask to be exchanged for the businessman and pro-Russian Ukrainian politician Viktor Medvedchuk, detained by Kyiv.

In a video published by the SBU, the Ukrainian intelligence service, Viktor Medvedchuk asks for an exchange with defenders and residents of Mariupol.

Russia claimed control of urban parts of the city on Saturday, with a few Ukrainian fighters still present at the Azovstal steelworks, which overlooks the Sea of ​​Azov.

The fall of Mariupol, besieged since the first days of the war launched on February 24, would allow Russia to consolidate a land route linking the Crimean peninsula which it annexed in 2014 and the regions in the hands of pro-Russian separatists in Donbass, in eastern Ukraine.

A city devastated by war

In the streets of Mariupol, corpses covered with blankets lie amidst shredded trees and charred buildings.

Residents of the city circulate between the carcasses of tanks and destroyed civilian vehicles while Russian soldiers check the papers of motorists. “I hope they will rebuild,” said Irina, a resident. “Summer will pass quickly and in winter it will be hard.”

Serhiy Gaïdaï, the governor of the Luhansk region, declared that street fights had started between Ukrainian and Russian troops and he again called on the population to evacuate.

The Russians advanced overnight and took the town of Kreminna, he said in a televised address, adding that the authorities could no longer ensure the evacuation of the town’s population.

About four million Ukrainians have fled the country since the Russian invasion on February 24, which killed several thousand people and caused an economic disaster.

Ukraine has continued its efforts towards rapid accession to the European Union, its representatives having completed a questionnaire which will serve as a starting point for the EU to decide on its accession.