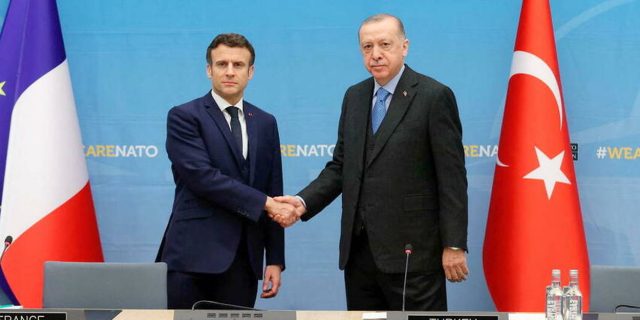 ATfter a long period of tension between Paris and Ankara, Emmanuel Macron hopes “to be able to move forward” with his Turkish counterpart Recep Tayyip Erdogan, with whom he met on Thursday March 24 in Brussels, where they agreed on humanitarian actions in Ukraine .

During a meeting before the NATO summit, the two Heads of State recorded their “willingness” to “work together” to plead with Vladimir Putin “for a ceasefire” in Ukraine, declared Emmanuel Macron in front of the press. They also decided to carry out “joint humanitarian operations”, in particular in Mariupol, a city in eastern Ukraine subjected to a siege and devastating bombardments for weeks by the Russian army.

Disputes over the Mediterranean

Each on his side, the two presidents have taken initiatives to seek a diplomatic solution to the war, Recep Tayyip Erdogan having offered to host a summit in Turkey bringing together Ukraine and Russia. According to the French president, the situation created by the Ukrainian crisis is an opportunity for a “strategic clarification” of “Turkey’s part in our relationship” within NATO, and on the issues “of Libya or of the Near and Middle East”. It’s about “being able to move forward on many issues that sometimes separated us”, which is “a positive element in a difficult context”.

Read:  Covid: the incidence rate at 515.4, unheard of in France since the start of the epidemic

This meeting came as Paris and Ankara have been seeking for more than a year to improve the bilateral relationship, affected by a series of disputes over the eastern Mediterranean, where an incident pitted Turkish and French buildings in June 2020. In October 2020 , Recep Tayyip Erdogan had questioned the “mental health” of Emmanuel Macron and had accused him of leading a “hate campaign” against Islam.