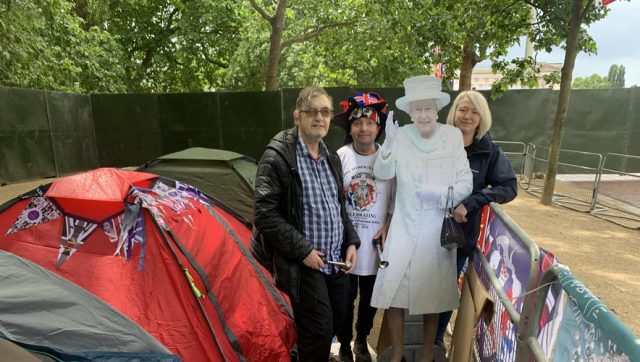 From June 2 to 5 during a long weekend, Great Britain celebrates the jubilee of the 70 years of reign of Queen Elizabeth II. A rich program eagerly awaited by the British. Report from our correspondent in London.

Since May, the Union Jack has been floating in the streets of London. Tourists are already walking around decked out in T-shirts with the symbol of the platinum jubilee of Elizabeth II: a stylized purple design that evokes the crown of St Edward.

John Loughrey, a monarch fan who never misses a royal event, has even pitched his tent next to Buckingham Palace. “We settled in on Monday May 30 to be sure not to miss the queen, explains this sixty-year-old. We are very proud of her!”

“An interface between royalty and the people”

Aged 96, Elizabeth II broke the record for longevity as head of state of Queen Victoria, who died at the age of 81 after 63 years of reign. “The jubilees are like an interface between royalty and the people, underlines Marc Roche, expert on the British monarchy who dissects the backstage of royalty in his latest book The Borgias at Buckingham. Impressed by the great ceremonies of the French Revolution and above all of the Napoleonic era, the British launched it in 1809 under King George III.”

Read:  Cement manufacturer Lafarge indicted for "complicity in crimes against humanity" in Syria

Highlights of the festivities

The heart of the festivities will take place from June 2 to 5 during an extended weekend. This Thursday, Trooping the Colour, the annual military parade in honor of the Queen’s official birthday, will take place at Buckingham Palace.

On the same day, beacon lighting, traditional for royal events, will take place in various locations across the UK and Commonwealth. The main one, that of the Tree of Trees, a 21-meter-tall “tree” made up of 350 smaller trees, will be lit at Buckingham Palace at 10 p.m.

On Friday, a special mass will be celebrated at St Paul’s Cathedral in London, recalling the links between the monarchy and the Anglican Church, the state religion since 1534. The great Paul, the largest church bell in the country, will ring for the service.

On Saturday, the Royal Family will travel to the Derby races at Epsom Downs in south London. On the same day, a major concert will be organized at Buckingham Palace by the BBC. Finally, on Sunday, a large procession around Buckingham Palace will recount, through various performances by artists, the seventy years of reign of Elizabeth II.

Giant screens will be installed in the streets of London, Edinburgh and Cardiff, the capitals of the nations of Great Britain. More than 70,000 public and private festivities and popular banquets will be organized across the country.

“We will go to street parties in our neighborhood, explains James Orven, a thirty-year-old from north London. We were told to bake cakes! So I will put on my chef’s hat and I will make my little contribution.

Jane and Allen Fairburn, sexagenarians on vacation in London, will also celebrate the event in a traditional way. “We will be at home, with friends, with just enough decoration”, specifies the retiree who lives in a village near Leeds, in the north of the country.

“Our small contribution, a scarecrow”

“But our small contribution in the village will be a scarecrow created from scratch by us for three weeks, Allen enthuses. It is a human-sized knight, made from cushions and covered with aluminum. We also made his horse!”

28 million pounds have been invested for the event by the Ministry of Culture. At the same time, other initiatives have been funded through private donors, including £22 million made available by the National Lottery. Some festivities were also funded through existing local authority support programs.