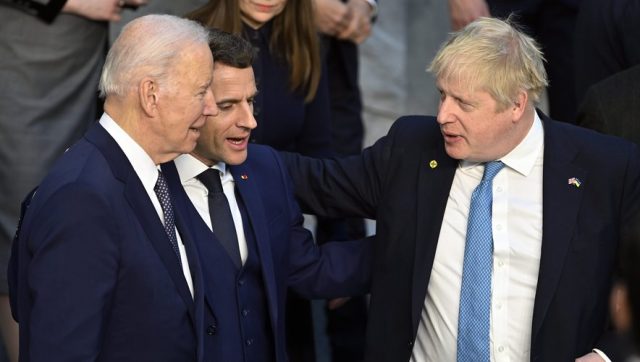 French President Emmanuel Macron, his US counterpart Joe Biden and other world leaders discussed on Tuesday how to provide Kyiv with security guarantees after the Russian invasion, an Elysee Palace adviser said, as Moscow launched a major offensive in eastern Ukraine.

The purpose of this telephone conversation was to “discuss our continued support for Ukraine and efforts to hold Russia accountable, within the framework of our close coordination”, reported for its part the White House, indicating that Joe Biden had notably consulted Emmanuel Macron and British Prime Minister Boris Johnson on the latest developments in the conflict.

Asked by journalists during a visit to New Hampshire, Joe Biden answered in the affirmative to the question of whether the United States would deliver additional artillery pieces to Ukraine.

In London, Boris Johnson told British MPs that the conflict in Ukraine was going to turn into an artillery battle. The Ukrainians “need support with more artillery. This is what we are going to give them (…) in addition to many other forms of support”.

Read:  Ukraine: for Joe Biden, "it's the start of a Russian invasion"

The United States is also preparing a new set of sanctions against Russia, announced the spokeswoman for the White House.

Jen Psaki said Joe Biden and his allies discussed coordinated efforts aimed at increasing the cost paid by Russia for its offensive in Ukraine.

An adviser to President Emmanuel Macron said that the allies discussed how to provide security guarantees to Ukraine at the end of the conflict if the country does not become a member of NATO, whose charter provides for a mechanism automatic military.

“Our country is ready to give security guarantees. These are the supply of military equipment to Ukraine in such a way that it can face new aggression if necessary, and also guarantees that we would involve in the sense that, if Ukraine is attacked, we could assess the means of assisting it and allowing it to restore its sovereignty and territorial integrity,” he said.

Read:  "Convoy of freedoms" in Canada: Ontario abandons the health passport as of March 1

The exchanges also focused on the need to convince countries outside the European Union and outside the G7 that the war in Ukraine is not only a problem for Europe or the West, but for global security, indicated the adviser to the French presidency.