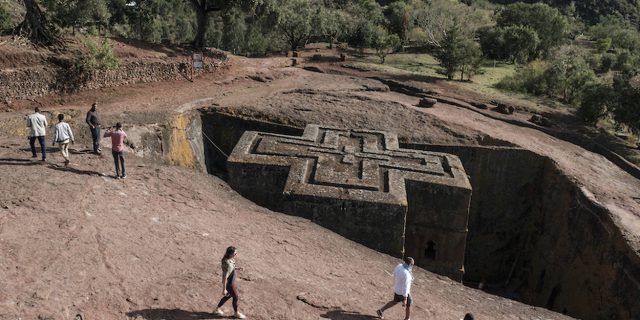 VS’is a highly strategic announcement for government forces. “The historic town of Lalibela has been liberated from the TPLF occupation,” Prime Minister Abiy Ahmed’s office said in a tweet on Wednesday (December 1). As the Tigray People’s Liberation Front (TPLF) marched towards Addis Ababa in recent weeks, Abiy Ahmed said last week he was heading to the battlefield. Since then the government has announced that it has regained control of several small towns, including Shewa Robit, about 220 kilometers northeast of the capital by road and Wednesday, Lalibela and its airport. This site, which takes its name from the king who is said to have reigned from 1190 to 1225, is particularly famous for its eleven excavated, rock-hewn churches in the Amhara region, dating from the 12th and 13th centuries.

Until the Covid-19 pandemic, Lalibela was also an annual tourist attraction providing much-needed income and employment opportunities to its residents. While the human cost of the war in Ethiopia’s Tigray region is already devastating, the clashes also ravage the country’s cultural heritage, putting ancient sites in danger of destruction.

Heavy blows for the rebels

In a statement, the Ethiopian government adds that pro-government forces are also “marching on the town of Sekota” in the Amhara region of northern Ethiopia, even as fighting has reportedly spread to Debre Sina, a town in less than 200 kilometers by road from Addis Ababa. Earlier Wednesday, Ethiopian authorities claimed pro-government forces recaptured the town of Shewa Robit, a week after Tigrayan rebels claimed responsibility for it.

In a statement Wednesday evening, the TPLF military command denied government success, saying the rebels were instead making “territorial adjustments” before “strategic offensives”.

Pro-government and TPLF rebel forces have been fighting each other for more than a year in northern Ethiopia. In June, the rebels recaptured most of Tigray, then advanced into the neighboring regions of Afar and Amhara, where they claimed in early November to have seized the towns of Dessie and Kombolcha, a strategic crossroads. on the road to the capital. The fighting is currently taking place on three fronts, including one near Debre Sina.

In recent days, state media have broadcast images of Abiy Ahmed in uniform in what appears to be the Afar region. On Sunday, these media claimed that the army was in control of the Afar town of Chifra. Abiy Ahmed on Tuesday promised further success to come to Amhara.

Olusegun Obasanjo, the African Union’s special envoy for the Horn of Africa, is leading intense diplomatic efforts to achieve a ceasefire, but little progress has been made so far. In the midst of the standoff, Ethiopian officials have previously said rebels must withdraw from Amhara and Afar before a “peaceful solution” can be found, which the TPLF has refused.

War erupted in November 2020 after Prime Minister Abiy Ahmed sent the army to the Tigray region to remove local authorities from the TPLF who challenged his authority and accused him of attacking. military bases. In nearly 13 months, the war has claimed thousands of lives, displaced more than two million and plunged hundreds of thousands of others into near starvation conditions, according to the UN.