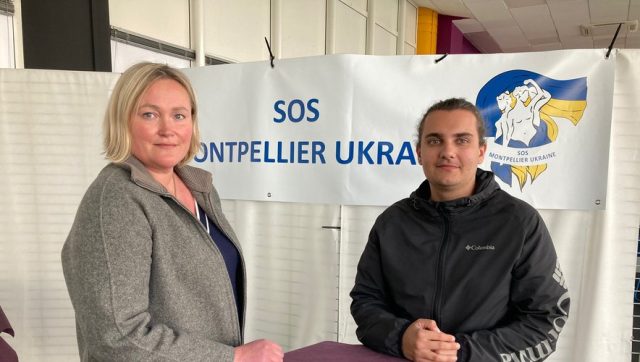 The SOS Ukraine Montpellier reception, transferred from the Maison des Relations Internationales (MRI) to the premises of the Antigone Olympic swimming pool, has welcomed, with the municipality and the Red Cross, nearly 900 refugees for a month.

In the vast SOS Ukraine Montpellier reception room at the Olympic swimming pool in Antigone, the few volunteers present are breathing a little this Monday evening. For a month, they have had to take care of families or isolated people from Ukraine, arriving in convoys, cars, trains. With, over the days, increasingly complicated profiles, psychological damage, as Anastasiya Galinier, treasurer of the association, confides: “The first days, we received people fleeing the war, with fragile profiles. And then, little by little, more and more refugees experienced or saw atrocious things”.

Witnesses, these women of Mariupol, left in disaster by car at the beginning of the terrible siege of the city, leaving a husband on the spot, parents (one of them has since lost her mother) and who took eight days before to reach the border. Another, bombarded in her village, who walked three weeks in the pampas with her three dogs before being taken care of. This adolescent, handicapped, supervised by the doctors of the Red Cross and who suspect family mistreatment on his person. Another mother who can no longer manage her emotions.

Anastasiya Galinier concedes: “The beginnings were difficult, we are simple citizens. We made do with the means at hand. We housed the first refugees in private homes, but it was difficult to manage in the long term”. Very quickly, other structures came to reinforce the system, Singa, Gammes for reception in French families or in private accommodation. The European directives put in place on obtaining residence permits, municipal premises, the opening of gymnasiums, have enabled the creation of a coordinated care pathway, as soon as refugees arrive in Montpellier: “We have welcomed 900 since the beginning of March. The flow is randomemphasizes Pierre Rochereau, project manager. We try to structure ourselves internally. The donation circuit, for example, is well in place”. The third convoy left this weekend for Ukraine.

Read:  The National Assembly recognizes the genocide of the Uighurs by China

The first stage is the emergency reception upon arrival at the premises of the Olympic swimming pool in Antigone. The Red Cross does a health check (including covid tests). A permanence of the prefecture informs the newcomers of the rights and aids. The gymnasium has 80 places, from 48 to 72 hours. The second stage is a transit phase in a mobile home at a campsite in Lattes, a holiday camp in Cap d’Agde for several weeks, approximately 400 places. Phase 3, long-term placement in host families or private accommodation by Singa, Gammes. The Rectorate identifies children for integration into the school environment.

“The most complicated thing is the time to devote because we are all volunteers. We lack volunteers ready to invest with administrative skills”says Peter. We also need translators. We are working with the prefecture, the town hall to give them real contracts”. As a bridgehead, SOS Ukraine must convey the information of each arrival to all the actors: “We have to coordinate everyone. What we fear the most is phase 3 (see insert), accommodation and integration. We must support them at all levels”says Peter.

Elodie Rubio, back from Poland

Elodie Rubio is one of four Montpellier residents who left for the Ukrainian border in a humanitarian convoy, from March 18 to 27, to bring donations from individuals and bring back refugees. A few days after her return, she takes stock of an extraordinary adventure.

Read:  Russia-Turkey – In the Black Sea, a centuries-old rivalry

What conclusions do you draw from this adventure?

With the other convoys from all over France, we loaded the donations into a truck for Kiev in Chelm, near the Ukrainian border. What is gratifying is to have seen later photos of the boxes in the middle of the soldiers defending the capital. Afterwards, finding volunteers to come back to Montpellier was also very demanding, 15 people and a baby. Plus six people in a minibus to Nice, two women took the train to Grenoble to find a loved one. This made it possible to create a bond with these people.

What are you most proud of?

To have found accommodation for this couple whose wife reached the border on foot, with her three dogs. To have accompanied them for the papers because their case was not simple.

Not at the moment. It requires time off, investment, but if I had to do it again, I wouldn’t hesitate for a second.

While the refugees are tight-lipped about their near future, Anastasiya is sure many will want to return home as soon as possible: “There will be many who will have lost everything and for those, it will be complicated. Start a new life here, but will they be able to fit in?” Especially for children, with integration into the school environment, in a new language. “This week, the Rectorate must make an inspection tour in Agde for a needs assessment”, notes the treasurer. And emotional dramas for families, many men stayed home to defend the flag: “These women, the children who do not know if they will see husband and father again one day”.