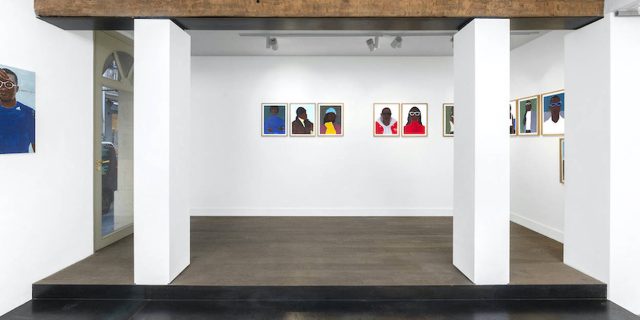 FAn emblematic figure of contemporary African art, known for his series of self-portraits and his protean art, the visual artist born in Côte d’Ivoire, of Beninese origin, engages us, through his art, to take our look at the others, on the world, on the universal. Present last February in Paris, for an autobiographical exhibition, and next May in Dakar for the Biennial of African Contemporary Art, the news of the artist, still as dense, invites us in turn to take a look at his work. .

“Looking at the world”

He remembers the sea of ​​his childhood, that of his native country, Côte d’Ivoire. He confides that the only memory of this landscape, “a paradise”, is enough to make him happy. Didier Viodé never hesitates to reveal himself, just like in his works. The subject of his latest exhibition “Looking at the world” is a series of autobiographical self-portraits, which enshrine images and gestures from his life, his parents, his childhood, his beliefs. The moment for the artist to focus on his inner journey.

In the intimate aisles of the Seventh Gallery are revealed self-portraits with or without faces, “Standing Men”, who are neither quite him nor quite another, photographs of his native country. The artist lays bare his intimacy but always with a certain modesty. Because modest, he is also in life. A trait of personality that we find voluntarily in his artistic work. He tells his journey and his detours, but without giving the details. Today, his faceless self-portraits have become portraits. Each drawing has its shift. Who is the one who paints, who is the one who watches? For this, he says he wants to fade into anonymity to leave room for others to express their view: “I ape the mask that has been put on us to exploit it ad infinitum, I reveal myself and I fade behind a faceless mask. »

Through his paintings, the artist questions our ability to look at the world. Observer and anthropologist of humanity, in a way committed, Didier Viodé draws his inspiration from everything that surrounds him, the street, politics, the media, the news, the pandemic. The faceless portraits follow a series of 59 “Self-portrait of a confined person” drawings made in the spring of 2019. Through the game of the mask, he invites us to go beyond the perspective of his gaze, to put our own there, to question with him or without him this world which surrounds us, but also to observe its beauty. It is in ultimate simplicity that Didier Viodé allows us to see beauty and “earthly beauty”: a desert populated by a shrub, a blue sky or an azure sea. He purifies and bares appearances to keep only the universal, a sublimated world. Inspired by Arte Povera, he concentrates his work on insignificant materials, he seeks above all to detach the work from its support, from the chassis, from the frame, from the constraint. Color invites itself into his work, “never more than two or three colors”, he insists.

An artist resolutely turned towards Africa

In this world that he gives us to observe, his native country is never far away. Although he has been living in Besançon for a few years, the multidisciplinary artist maintains strong ties with his origins. Among his reflections, that of the place of art in Africa. To the question of the works returned to Cotonou, the artist of Beninese origin replies: “African countries are beginning to take an interest in art, modern works now accompany old works. Benin is a small country culturally and artistically loaded, it is important to be able to promote the works, also on the continent. And when asked if there exists, according to him, a contemporary African art, it is with this modesty and this universalism that we recognize in him that he answers: “Everything is a work of the mind, I am before a whole artist, a contemporary artist, of African origin, turned towards Africa and towards the world. The African continent is endowed with a plurality of cultural riches, it is difficult to say that there is “a contemporary African art, there are several ways of apprehending art as an African artist, or non-African on the Africa, by being geographically in Africa or elsewhere. And to add: “More generally, it is above all important to give visibility to contemporary African artists and to promote their work, and of course also on the African continent. »

Read:  The CEO of Activision-Blizzard in turmoil after the takeover of his company by Microsoft

The desire to share his view of the world animates the artist. Finally returning to the path of galleries and events dedicated to art brings him joy. As we know, people are at the center of its concerns. His bulimic gaze on the world, he wishes above all to share it physically, to meet, exchange, celebrate: “The digital works, whose quality and usefulness he salutes despite everything, cannot replace that”, he underlines . Among its next physical, the fourteenth edition of the Biennale of contemporary African art in Dakar which will take place from May 19 to June 21 2022. The official international exhibition entitled “Ĩ #NDAFFA – Forger – Out of the Fire” will welcome 59 artists including 4 collectives, coming from twenty-eight (28) countries of the world, including 16 African countries and 12 countries of the diaspora.

The general theme refers to the founding act of African creation, which nourishes the diversity of contemporary African creativity, while projecting new ways of telling and apprehending Africa. The opportunity for the Ivorian artist of Beninese origin, who is among the official selection, to open our eyes, thanks to his minimalist and universal art, to the wealth of the continent and its questions.

* “Ĩ NDAFFA # – Forger – Out of the fire”, as part of the fourteenth edition of the Biennial of Contemporary African Art, in Dakar, Senegal, from June 19 to 21.