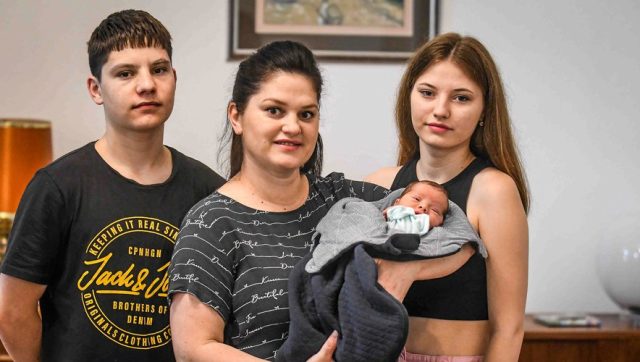 Oksana fled Ukraine pregnant with her two children. The youngest of the family, Danilo, was born on June 2 at the Grand Sud polyclinic.

Little Danilo was born on June 2 at 1:30 a.m. at the Grand Sud polyclinic. He makes his mother, brother and sister happy. Since war broke out in Ukraine and caused five million people to flee, Danilo is the first refugee born in Nîmes.

Later, when he returns home and the situation has calmed down, will he be able to tell his story… And everyone, one day, will smile again. In the apartment where they have been staying for several weeks, Oksana, Katerina, 17, and Oleksi, 16, her first two children, willingly pose with the youngest. But behind the smiles of circumstance, one guesses tiredness and melancholy.

Without Ivan, the father, the family fled Kolomya on February 24. It is a city of 70,000 inhabitants renowned for its rich architecture, in the south-west of the country, on the edge of the Carpathians, not far from Romania and Moldavia. Oksana was responsible for a bank branch; her husband, an architect. The children were doing brilliant studies. Oleksi is even a boxing prospect. Life was beautiful and happy.

Exile to live a peaceful end of pregnancy

“The house we live in is located barely 3 km from a military airfield. Every day, we had our share of fear, the fear of taking something on our heads. On February 24, around 4 a.m., we were woken up by drones flying over the city,” Oksana said. She adds: “We stayed a few more days at home in the hope that the situation would improve. But we quickly understood that it was going to last and that the only way out we had, to put the children in safety and to live a peaceful end of pregnancy, was to leave.”

It was on March 1 that the mother and her two children set off for Poland to reach Paris by bus where they were picked up by friends. They arrived in Nîmes on April 11. It was Marcel Bienvenu who took them into his home while waiting for the Red Cross to find them lasting accommodation.

Only one wish, to return to the country

This former specialist educator, volunteer at Restos du Coeur, now hosts a Ukrainian woman and her son for whom he is looking for a therapeutic apartment so that the sick mother can benefit from care. But he remains at the bedside of Oksana and his children whom he accompanies in the administrative procedures and with whom he communicates most often using an application. “It’s sometimes a real obstacle course,” said the Nîmes, touched by the courage shown by these Ukrainians in exile. “That we don’t believe that they are happy to take advantage of what France can offer them by welcoming them. If they are relieved to be out of danger, I can assure you that they are going through a real trauma and that they have a lot of courage to overcome all that. They are constantly asking for information to find out what is happening at home, “he says.

Read:  Sony under pressure to release God of War and its sequel Ragnarök on PC?

Eyes reddened as much by fatigue as by sadness, Oksana says that she will never be able to thank Marcel Bienvenu enough for his availability, Doctor Heiss and the medical staff of the polyclinic, the owner who accommodates him and more generally “the French hospitality”. But she admits that she has only one hurry, it is to return to the country with her children, to find her father, her husband and to see Danilo grow up.