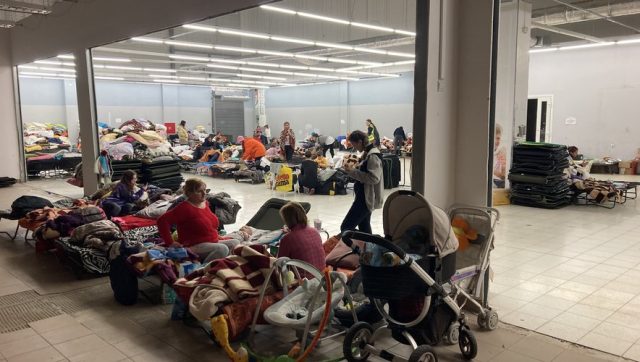 Along the Polish highways, shopping centers have turned into transit hubs to direct Ukrainian refugees to the rest of Europe.

The A4 highway, which leads from Rzeszów in Poland to Lviv in Ukraine, is desperately empty. And for good reason, the border post, located less than a kilometer from the last exit before the war, has become a buffer zone. Only a few duly authorized trucks pass to supply Lviv.

In the other direction, buses shuttle from the border to bring refugees to Korczowa Dolina, a huge commercial warehouse converted into a transfer hub to Poland and Europe. Inside, stalls are spread along the aisles. Mobile telephony, catering outlets, pharmacy, nursery, medical post and a few host country counters, including one in France, run by volunteers.

Volunteers from all countries

“We are private individuals. With my husband, we were on a road trip in Italy. We arrived last Monday with our motorhome. We are going to stay for a month”, says Patricia, crossed on the stand. On one wall, a sketchy map of France and some suggestions for accommodation towns. Montpellier, Toulouse, Tarbes, Marseille for the South.

“Every day, we send refugees away. We coordinate transport, accommodation”, emphasizes the volunteer. At the height of the first weeks of fighting, nearly 10,000 refugees passed through Korczowa. Currently the average is around 2,500. “ We feel the pressure, they show us their destroyed house on their phone, there is emotion even if he doesn’t show it too much. “

Read:  Two Britons detained by the Russians ask to be exchanged for a Putin relative

In an alley, Max, a clown from Israel, has fun with a young boy, under the moved eyes of the family: “I work in hospitals in Israel, we have a humanitarian project to send clowns where we need to help. I arrived yesterday with two other clowns. We are staying in Poland for ten days.” The dormitories, dozens of camp beds lined up, occupy the empty spaces of the huge metallic structure. Many women and children. The spaces are guarded by soldiers, the men are asked to stay outside. On the cots, everyone kills time as best they can.

The children have fun in the vast corridors of the shopping arcade. There, a game of football is improvised with some volunteers from a humanitarian association. Sabrina went to offer candies to the children: “ Two little girls took me in their arms. I explained to them that we had traveled 2,000 km to come and see them. They kept kissing me. “ A soft toy is offered, the mother will politely refuse. Jacques came with his car and hovered in front of a medical station: “ I sleep there, I do the reception. When I see people arriving at night, I get up and help the grandmothers carry the suitcases to check-in. ”

With a smile, because here more than elsewhere, the language barrier is sorely felt. Translation applications are running at full speed. Forty kilometers further down, on the other road that leads to the border, the small town of Przemysl also has its reception point in a former shopping centre. On the huge car park, the coaches follow one another: Portugal, Germany, Spain, France. In Poland, international solidarity is running at full speed, in the face of war. Right in the heart of Europe.

Leaving Castelnau-le-Lez (Hérault) on Friday March 18, the Montpellier convoy made up of three minibuses (provided by the town halls of Saint-Mathieu-de-Trviers, Mireval and Le Pouget) is coming to the end of its mission: after the delivery of donations (medicines, food, hygiene products) to Chelm in Poland, a town close to the Ukrainian border, the convoy visited several refugee camps for additional assistance: sorting of medicines, reception of refugees , etc). Friday evening, the convoy left Poland with Ukrainian families who will be repatriated to Montpellier on Sunday.