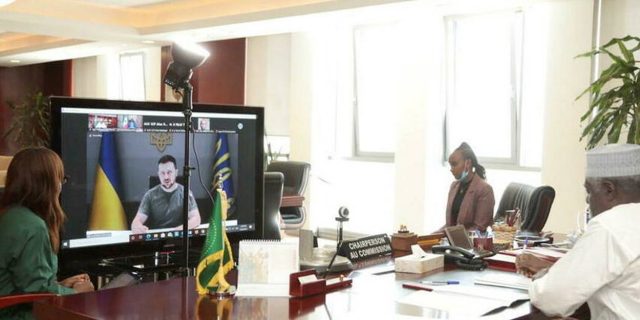 ” L’Africa is hostage to those who started the war against our state. In front of African Union officials, including four heads of state, gathered for a virtual meeting on Monday, June 20, Volodymyr Zelensky launched, by videoconference, in a vibrant plea in favor of another narrative of the war. . ” Yes, this is war. Russia’s war against us. This is not a crisis […], it is a brutal war. Did you hear about all this from your Russian partners with whom you stayed in contact? he launched. I’m sure they tell you just the opposite. But it must be said that they need this crisis, which they maintain knowingly, deliberately, they are using you! These sanctions are only there to prevent Russia from enslaving us,” Zelensky told his peers. Words which inevitably echo in Africa but which in no way presage a reversal of Africa’s position. At the very beginning of the war, Ukraine and particularly its leaders had drawn the wrath of the African Union after the dissemination of several testimonies from African nationals who claimed to be victims of racism, with supporting images.

This Monday, his plea therefore clearly had a double objective: to obtain diplomatic and political support from African leaders. As he has done in recent months in front of other world leaders, the Ukrainian leader has repeatedly insisted that the consequences of the war are the fault of Russia. “This war may seem very far away for you and your countries. But catastrophically rising food prices have already brought (war) into the homes of millions of African families,” he said. The “unjust” level of food prices “caused by the Russian war […] is painfully felt on all continents,” the Ukrainian president lamented.

Indeed, a dozen African countries, including Senegal, depend on Russia and Ukraine for at least half of their wheat imports, according to the FAO. Several African countries are feeling the combined effects of delayed grain exports and rising fuel prices.

President Zelensky said “difficult negotiations” were underway to unblock Ukrainian ports, where millions of tonnes of grain cannot currently be exported to Africa due to the blockade of the Russian fleet in the Black Sea. “There is no progress yet”, he admitted, believing that “the food crisis in the world will last as long as this colonial war continues”. “No real tool has yet been found to ensure that Russia does not attack (the ports) again”, lamented Volodymyr Zelensky, for whom “to get rid of the threat of famine” is “our mission number one “.

Ukraine, with its partners, “is trying to build a new supply logistics” of cereals to African countries and other continents, he explained, “international organizations not being able to influence” Russia, he said, “to restore international (food) security.”

Volodymyr Zelensky also said he wanted to “intensify” the dialogue with the member states of the African Union, by soon appointing a “special representative of Ukraine for Africa”. He also proposed to prepare a “big Ukraine-Africa political and economic conference”. Russia has made inroads in Africa through military alliances and arms deals. In 2019, Russian President Vladimir Putin hosted dozens of African leaders in Sochi in a bid to reassert Russia’s influence on the continent. But especially on April 7, the date of the vote to suspend Russia before the UN Human Rights Council, half of the African states abstained.

Read:  Cyberpunk 2077: a live to announce the release of optimized PS5 and Xbox Series versions?

Senegalese President Macky Sall, who is also currently chairing the AU and recently visited Russia, praised Zelensky’s “friendly address” on Twitter, reaffirming that “Africa remains ) committed to respect for the rules of international law, to the peaceful resolution of conflicts and to freedom of trade”. At the beginning of June, in Sochi, the Senegalese president urged Vladimir Putin to “be aware” that Africa was a “victim” of the war in Ukraine. While recalling that the food tensions had been aggravated by the sanctions taken against Moscow, returning part of the responsibilities to the West.

I thank the President @ZelenskyyUa for his friendly address today to the virtual meeting of the Extended Bureau of the@_AfricanUnion. Africa remains committed to respect for the rules of international law, the peaceful resolution of conflicts and freedom of trade. pic.twitter.com/63jZCvamix

Moussa Faki Mahamat, President of the Commission of the Pan-African organization, also indicated that the AU had “reiterated (its) position on the urgent need for a dialogue” to “put an end to the conflict in order to allow the return of peace in the region and restore global stability”.