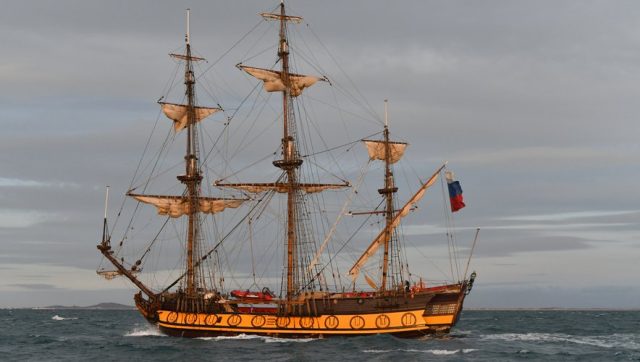 For several weeks, the arrival of this civilian boat to the Russian flag, remained in suspense.

The three-masted Shtandart, a Russian civilian ship, is not authorized to moor in Sète during the maritime event Escale à Sète, which will be held from April 12 to 18. The port authority was informed, then the organizers. The news was notified to the commander of this frigate during the day of Tuesday, April 5. The crew of the Shtandart, which is currently sailing in the Mediterranean, was already on its way to Sète.

The Russian flag is problematic

The disappointment is inevitably immense in the ranks of the organization of Stopover in Sète, which had been working for several weeks to bring in this frigate replica of an 18th century ship. Which flies the Russian flag. But the captain, of Russian and Ukrainian origin, has also chosen to float these last colors in the wind. The crew having taken sides against the current war and participating in humanitarian missions in favor of Ukraine.

Joint, Wolfgang Idiri, the general manager of Escale in Sète, admits his disappointment but indicates: “We accept and respect this decision. It is a choice of reason, even if it pains us a lot. If the prefecture took this decision, it is because the security conditions were not to be met”. These are the risks, in terms of security, for the Shtandart and its crew, and in terms of disturbances to public order, in connection with the war in Ukraine, which would motivate the decision.