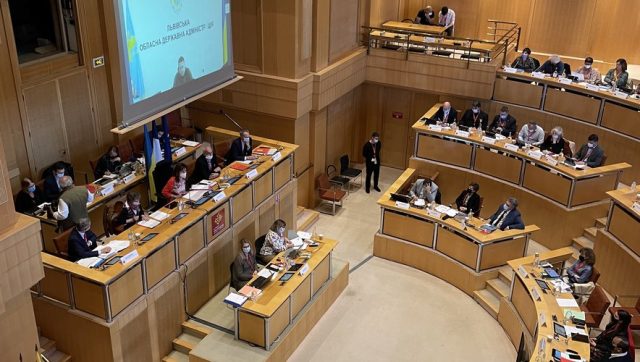 The governor of the Lviv region, Maksyn Kozytsky, spoke to the plenary assembly, which met in Montpellier and Toulouse on Thursday.

The war in Ukraine has occupied all minds, all debates, all fields of the news for a month. The plenary assembly of the regional council of Occitanie, which took place this Thursday in the hemicycles of Toulouse and Montpellier, did not escape the rule.

Conflict arose from the start of this session. Via the intervention by videoconference of Maksyn Kozytsky, governor of the Oblast of Lviv, a region of 2.5 million inhabitants, “about the size of the former Languedoc-Roussillon”, specified Carole Delga.

A quarter-hour speech, vibrant, direct, devoid of any diplomatic affectation: “It’s been a month since our soldiers held back one of the largest armies in the world” he recalled, after having thanked “the French for their solidarity with Ukraine in its fight against Russia, […] and for their humanitarian aid”.

“We will win this war, it will be the end of Putin’s Russia. […] Our real brothers are the Europeans, we are a European nation that loves freedom and is strong in spirit,” he added.

Read:  Coup in Burkina Faso: a thorn for Barkhane

Before getting more biting: “We ask you to call on your business community to leave the Russian market. […] Ask the authorities to find a way to put pressure on them. We expect France to decide on an embargo on oil and gas. […] Don’t allow Russia to make money.”

Standing ovation, but the RN seated

And all the elected officials to stand up and applaud him with unfeigned emotion at the end of his speech. All except the elected members of the National Rally who applauded seated.

An attitude particularly criticized by the elected Christophe Rivenq (Les Républicains), and that Jean-Paul Garraud, the boss of the RN group in the Region, justified in stride: “If I did not get up, it is because that part of the statement caused me a problem. The delivery of weapons to the Ukrainians is a problem that risks degenerating and bringing our country to a war,” he explained.

Read:  Traces of cocaine in the toilets of Westminster: the scandal that shakes the British parliament

However, the RN group then voted, like the other groups, in favor of the report on the solidarity actions developed in Occitania for the Ukrainian people.

Thus, to those already deployed since the start of the conflict, a new package of measures presented at this meeting of regional advisers was added: the adoption of a fund of €300,000 (€100,000 to supplement the external action fund for local authorities, and €200,000 to support associations, partners and promoters of local projects); the strengthening of the regional solidarity fund of one million euros for refugees and asylum seekers, in order to facilitate the reception of Ukrainian citizens in Occitania; and free use of the TER network and liO coaches for Ukrainian citizens.

Finally, places in boarding schools and vacant staff accommodation in high schools will be made available, for an accommodation offer of 500 places. The Simone-Veil high schools in Gignac (in Hérault) and Lucie-Aubrac in Sommières (in Gard) will be particularly involved.