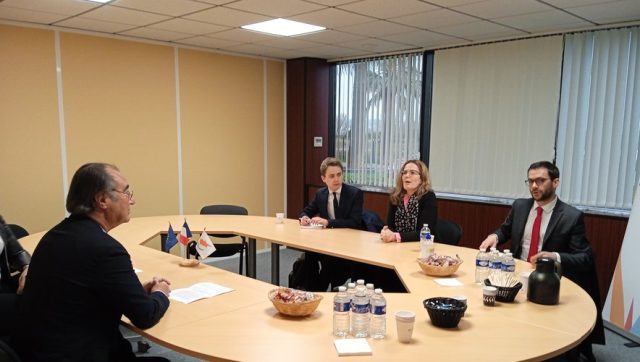 As part of the French presidency of the European Union, the Ministry for Europe and Foreign Affairs (MEAE) wanted local authorities and French companies to establish links with other European countries.

It is in this context that Salina Grenet-Catalano, French ambassador to Cyprus, recently came to meet François Commeinhes, president of Sète agglopôle Méditerranée and mayor of Sète. The idea is to establish a link between Paphos and Sète, towns that have similarities. Both have 47,000 inhabitants and are the center of their conurbation. In Paphos, coastal tourism largely dominates with the presence of many hotel complexes. Many archaeological sites are also a tourist godsend and viticulture is very present in the local economy.

Commonalities between Paphos and Sète

This meeting made it possible to address several themes with a view to cooperation. First around Unesco. The Paphos Archaeological Park is a UNESCO World Heritage Site. The city of Sète and Sète agglopôle Méditerranée are also working on applications for UNESCO heritage classification. Cultural side, Paphos was designated European Capital of Culture in 2017, Sète and its agglomeration are also associated with Montpellier’s bid for European Capital 2028.

Read:  Vladislav Surkov: “Our new state will have a glorious history”

On the eve of the 2024 Olympics, the territory could also host, as a playground, qualified Cypriot athletes in preparation for the Olympics. In terms of tourism, an exchange between agents of tourist offices could be envisaged. Other themes such as the environment, the economy or the “Smart city” are areas in which both communities are involved. The principle of a next meeting with the mayor of Paphos was recorded after the French electoral deadlines.