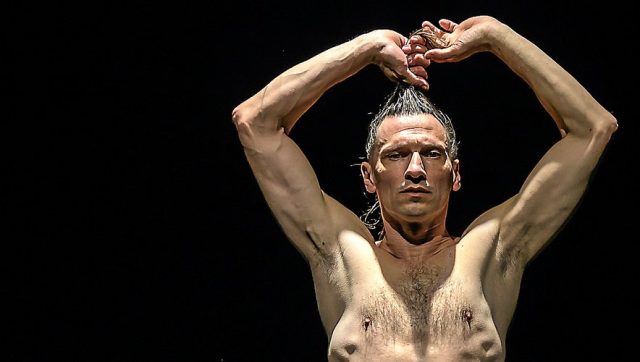 Russian dancer and choreographer of Ukrainian origin, Mitia Fedotenko has lived and worked in Montpellier for twenty years. He confides his concern about the war in Ukraine.

Mitia Fedotenko returns from Albi where he rehearsed for two weeks his latest creation entitled “Russian Roulette”. Despite great fatigue, he maintained the appointment, eager to testify – in perfect French – on the war started in Ukraine by Russia and the consequences it will have on his projects.

How do you define yourself?

I was born in 1971, when the Soviet Union was one country. I lived in Moscow, started dancing at the age of 8, and later studied architecture. In the 90s, daily life became very difficult. That’s why I did a lot of work. Before leaving for France in 1996 with my darling.

I had been in a professional dance troupe since 1990. The French Association for Artistic Actions came to Moscow and spotted us. We first went to Angers then to Montpellier, interspersed with stays in Germany, Switzerland and Rennes. I created the company “Autre Mina” in 1999 with caring people. In France, I consider myself a voluntary exile.

Are you going back to Moscow?

I had been going there regularly since 2016. There are the pro-Putin on one side, and the supporters of freedom of expression and human rights on the other. My friends are mostly among the latter. I still maintain links with many artists.

Many cannot leave or express themselves as they wish.

Can you still go back to Russia?

I could have gone there until very recently without being prosecuted. But since a new law was passed at the beginning of March, I risk three to nine years in prison simply by saying “No to war”. I no longer see my future in Russia.

On the occasion of her fiftieth birthday, Mitia Fedotenko treats herself to a retrospective of the great authors who have marked her, from Dostoyevsky to Shakespeare via Gogol and Malevich.

Read:  Call of Duty Vanguard | Warzone: Season 2 offers a visual that throws and announces a novelty!

The play “Roulette russe”, of which he is the choreographer and the dancer, will be performed at the Agora du Crès on March 31. In the meantime, the artist who created the DansePlateforma festival last year will announce what is going on with the second edition.

“I receive a lot of applications from Russian choreographers but I can no longer go there and all cultural events are cancelled. I understand the sanctions against artists close to Putin. I don’t want to cut the cord with my country, but I I feel more supported and more useful here.”

What is your opinion of Putin?

In the twenty years he has been in power, things have gotten worse on many fronts. With the poisoning of Navalny (Russian opponent), the masks fell. Power is no longer hidden.

What is your feeling about the geopolitical situation?

Russians and Ukrainians are two fraternal peoples. Ukraine has the right to take the path of independence. But Putin absolutely wants to achieve a new Soviet Union. He is a mental patient who will not stop there. The most worrying thing is that he can no longer back down and that he has nuclear weapons. I am ashamed to be Russian and to have to bear the decisions of this government on my shoulders. But I am just as proud to belong to this great Russian artistic tradition and I am also a bearer of this culture.

Do you still have hope?

I am well informed, therefore pessimistic. The first victims of this war are the people. If there is any hope, it is to see the Russian people revolt, and then that would be the end of Putin. But I am also optimistic and humanist, because this test allows to know the true face of people. I said it on social media: “If you support the war, remove me from your friends!”.

Does working on your projects help you?

Yes of course. My play “Russian Roulette” was inspired by Dostoyevsky’s “The Gambler”. His hero was addicted to gambling and I am addicted to dancing. Since the age of 10 or 11, I have experienced the power of being on stage, carrying an idea and expressing it with the body.

Choreographer Mathilde Monnier: “We are all affected”

How did you know Mitia Fedotenko?

When I ran the National Dance Center in Montpellier, I welcomed him to the Exerce school, twenty-five years ago, with his partner Natacha who still dances with me! They had the courage to leave their country because they could not work there as they wished. They have learned the language and are very creative, always in search. The situation is terrible for them because their whole family is in Russia. I hope that the DansePlatforma festival created last year by Mitia will be able to have an extension. It would be a terrible mess if it didn’t.

Yes, I exchange by email with my friend, the choreographer Viktor Ruban whom I met in 2013 in Montpellier, at the Exerce school. He does not want to leave kyiv, where he has created a structure around dance. He lives in his apartment and his parents took refuge in the metro to escape the bombs. I was ready to welcome him to Montpellier but he doesn’t want to leave. As soon as I have no news for several days, I am very worried. It’s shocking to see that all the artists are at a standstill. It’s a real war, and we’re all psychologically affected. But we will be there by their side.

The correspondence between Mathilde Monnier and Viktor Ruban can be found on www.lokko.fr.