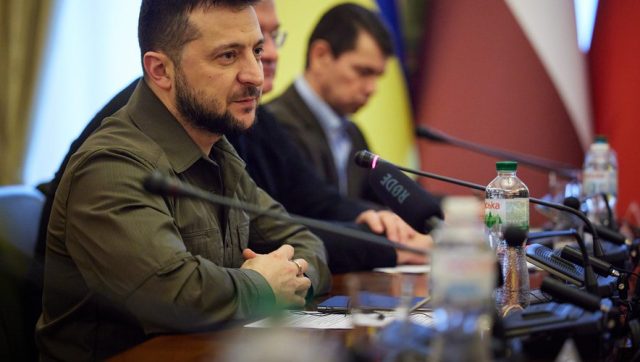 The Ukrainian president gave an interview to Russian media in which he asserted that the Ukrainians are ready to accept neutrality.

While new negotiations between Ukraine and Russia will open this week to try to find an agreement, Volodymyr Zelensky, the Ukrainian president granted an interview this Sunday, March 27 to Russian media.

During this interview carried out by videoconference, journalists from three independent Russian media (whose broadcasting was moreover blocked in Russia and an investigation was opened by the Kremlin after the interview) questioned the Ukrainian president for more than an hour and a half.

Even if the words may not be reported too much in Russia, the Ukrainian president nevertheless spoke on several points.

After the rejection, the return of neutrality

And in particular the question of the “neutrality” of Ukraine initially rejected by Zelensky but whose discussions are in progress.

He assured that this “neutrality” which was one of the points of negotiations with Russia was “studied in depth”. Before adding: “We are ready to accept it.”

He even tackled a compromise concerning the regions of Donbass, in the east of the country.

“We can end the war quickly”

“I think the war can be ended quickly, and it’s Putin and his entourage who are dragging things out.”

But he still specified some conditions. “I don’t want it to be another document like Budapest memoranda.”

The president referring to the agreements signed in 1994 with Russia which guaranteed the integrity and security of Ukraine in exchange for the abandonment of nuclear weapons inherited from the USSR, as reported by Ouest France. Agreements that were not honored by Russia with the invasion last month.

For Volodymyr Zelensky, if Ukraine and Russia ever come to an agreement in the coming days, the president would like it to be “obligatorily ratified by the parliaments of the guarantor countries”.

Read:  Germany: killing in a center for the disabled, a caregiver sentenced to 15 years in prison

Waiting for negotiations this week

Russian and Ukrainian delegations should meet from this Monday, March 28 in Istanbul, Turkey to discuss.

The holding of physical meetings between Ukrainian and Russian representatives has been confirmed by both sides.

Talks which should last until Wednesday March 30, with the hope of a resolution of the conflict at the key, even if the last had not resulted in any agreement…

But it would already be off to a bad start… Already on Monday, March 28, Vadim Denisenko, adviser to the Ukrainian Minister of the Interior, did not believe it too much, declaring that he did not expect major progress during these peace talks: “I don’t think there will be any progress on the main issues.”