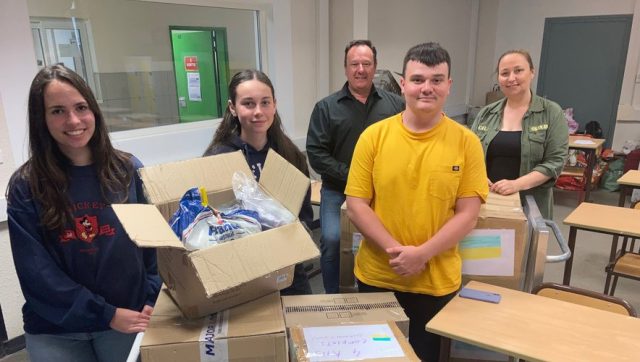 Students of Joffre, five high school students have prepared more than 200 personalized ready-to-offer kits for young Ukrainians. The parcels were handed over to the SOS Ukraine association to be included in an upcoming convoy to the border.

Diane, Océane, Romain, Valentine and Marie, students of the Joffre high school in second and first general finalized on Wednesday the 220 ready-to-offer personalized kits for Ukrainian children. An operation endorsed by the school management and overseen by the association of parents of independent students from Joffre (APIJ)

The principal of the Joffre high school appreciated the initiative

Catherine Gwizdziel, principal of the Joffre high school, commented on the initiative carried out by Diane and her friends: “We have already carried out a similar operation, with donations. This second proposal, in the form of a kit, is better structured, in particular for the distribution “. Twelve Ukrainian students have been enrolled in high school: “Currently, they are in intensive French module in college. We will welcome them when they return from the holidays for an immersion in the classes”. At the start of the next school year, these students should be able to integrate into the courses “if they are still with us”.

It was Diane who proposed the initiative, for reasons related to the history of her family: “My great-grandmother is 92 years old. She was nine years old at the time of the Second World War. The family lived in Alsace and she had to flee to Périgord. She remembers a shell which exploded near the house and a soldier who gave her a rag doll. She was very proud of this gift. She still remembers it, she smiles when she talks about it”.

These old facts echoed in Diane’s head, following the invasion of Ukraine by Vladimir Putin’s army. Why not offer a gift to the children of refugees, isolated in camps, in Poland, Romania, Slovakia or Moldova? “Thanks to social networks, we may be able to capture their smile thanks to the address left on each personalized card and a hashtag”smiled the young high school student.

Read:  Zelda Breath of the Wild: the game finished in a way as complex as it is original

The project took a few Wednesdays of effort “about fifteen hours in extracurricular”. First to collect donations from other students or companies, before boxing each small batch. A jumble of a toothbrush, a toy, a complete outfit, a hygiene product and a personal note from a Montpellier student to a Ukrainian child: “We wrote the letters in English, it was easier”. The packages were dropped off at the Maison des Relations Internationales (MRI) on Wednesday, for the next convoy to the Ukrainian borders. And in each message, a recurring word cited by the students to the children torn from their land: hope. Hope.