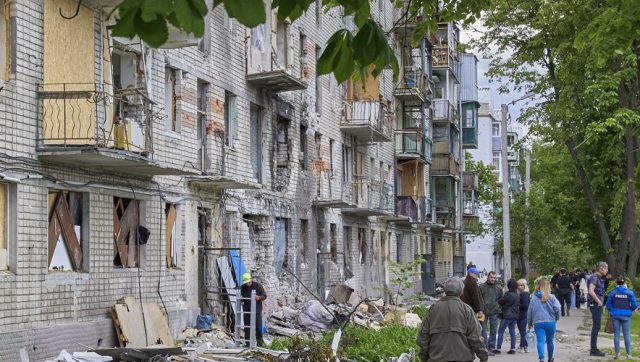 The Russian army on Wednesday intensified its offensive on two strategic towns in Donbass, a region in eastern Ukraine, where constant shelling, including on residential areas, is deadly for civilians and threatens to cut off the last route to escape the area. In Russia, Putin continues for his part to minimize the impact of the war.

After the failure of its assaults on Kyiv, the capital, and Kharkiv, the second largest city in Ukraine near the Russian border, Russia is concentrating its efforts on taking the two provinces of Donbass, Donetsk and Luhansk, including part of territory has already been in the hands of pro-Russian separatists since 2014.

The Russian army is trying in particular to trap the Ukrainian forces in a pocket on the easternmost front of the conflict triggered by its offensive launched on February 24.

At the end of this pocket are the cities of Sievierodonetsk and Lyssychansk, which face each other along the Donets River. Their capture would allow Russia to fully control the Luhansk region, which is now one of its declared war aims.

The Russian army is advancing in three directions in an attempt to surround the Ukrainian forces and cut the main road linking the two cities to the rest of Ukraine, which would thus deprive them of all supplies.

“All the last forces of the Russian army are now concentrating on this region (…) the occupier wants to destroy everything there”, said Ukrainian President Volodimir Zelensky about Donbass, in his daily address broadcast on the course of the night.

Serhiy Gaidai, governor of the Luhansk region, said six civilians were killed and at least eight others injured in Sievierodonetsk.

Russia simplifies access to citizenship in occupied regions of Ukraine

The decree marks another step towards the “Russification” of the two regions, where Moscow’s war has allowed it to establish a continuous land bridge linking Russia with the Crimean peninsula annexed in 2014.

Vladimir Putin’s decision expands a program available to residents of areas controlled by pro-Russian separatists in Ukraine’s Donetsk and Luhansk regions, where Moscow has issued around 800,000 passports since 2019.

Russia claimed full control of the Kherson region in northern Crimea in mid-March and holds parts of the Zaporizhia region to the northeast.

Southern Ukraine, the other active front

The Ukrainian army says it repelled nine Russian assaults on Tuesday in Donbass, during which at least 14 civilians were killed under the bombardments of aviation, rocket launchers, artillery, tanks, mortars and Russian missiles.

Reuters could not immediately verify the claims but saw damage from at least two missiles to a train repair shop in Pokrovsk, one of the supply and evacuation hubs for the Donetsk region. .

In Kramatorsk, near the front line, the streets were largely deserted while in Sloviansk, in western Donbass, many residents took advantage of what Ukrainian authorities presented as a break from the Russians to flee the city.

“My house was bombed, I have nothing left,” said Vera Safronova, sitting on a train among the evacuees.

Besides the Donbass, southern Ukraine, near the Crimean peninsula annexed by Russia in 2014, is also another active front.

Local authorities reported one civilian killed and numerous houses damaged by shelling in Zaporizhia and an industrial site destroyed by missiles in Kryvyi Rih.

In this region of Ukraine bordering the Black Sea, the conflict prevents the export by boat of Ukrainian cereals and sunflower oil, which contributes to rising food prices throughout the world and threatens to cause famines.

Russia, which blames Ukraine and its Western backers for the potential food crisis, said on Wednesday that it was ready to set up humanitarian corridors for ships leaving Ukrainian ports, provided that Western sanctions imposed on against it because of the conflict be lifted.

Quoted by the Interfax agency, Andrei Roudenko, Russian Deputy Minister of Foreign Affairs, declared that the resolution of this problem required a “comprehensive approach”. Russia is in contact with the United Nations and “does not rule out the possibility of international talks to unblock Ukrainian ports”, he added.

He also considered it premature to establish a Russian military base in the region of Kherson, bordering Crimea and controlled by the Russians.

On the shores of the Sea of ​​Azov, which is an extension of the Black Sea, the port of Mariupol is functioning normally, assured the Russian Ministry of Defense, less than a week after the complete capture of the city after three months of devastating siege and bombardment.

At the start of the fourth month of conflict, which Moscow presents as a “special military operation”, the Russian army has recorded only limited gains in Ukraine compared to the means deployed and the losses it seems to have suffered.

The United States, the European Union and their allies have adopted several sets of sanctions against Russia since the start of this offensive in Ukraine. The administration of US President Joe Biden announced on Tuesday that it would not extend the waiver expiring on Wednesday and allowing Russia to continue to reimburse US holders of Russian government bonds.

Read:  Presidential 2022: when Europe invites itself into the race for the Elysée

This decision could theoretically bring Russia closer to a default on its debt, but Moscow is not short of money. Its repayment terms on its debt weigh little against income from gas and oil, which reached 28 billion dollars (26.3 billion euros) in the month of April alone with the high level of oil prices. energy, favored by the conflict in Ukraine.

In a video-linked intervention at the World Economic Forum in Davos, Volodimir Zelensky said that only direct discussions with his Russian counterpart Vladimir Putin would bring an end to the conflict and that for that Russia must withdraw behind the lines in force on 24 february. “This could be a first step towards discussions,” he said.

Russian President Vladimir Putin today ordered a 10% hike in pensions and the minimum wage to protect Russians from inflation, but denied that the country’s economic woes are entirely linked to the war in Ukraine.

As inflation rose nearly 18% year on year last month, the Kremlin chief admitted that the year 2022 would be “difficult” for the Russian economy.

Speaking at a televised meeting of the State Council in Moscow, he added that “this does not mean that all these difficulties are related to the special military operation”, the expression used by Moscow to describe the offensive launched in Ukraine on 24 February.

“Because in countries that have no operations – say, overseas, North America and Europe – the inflation is comparable and, if you look at the structure of their economies, it is even worse than the ours,” Vladimir Putin continued.

The Russian president’s comments ignore the direct role of the war in Ukraine in the surge in inflation that Western economies are experiencing. The conflict has caused energy and food prices to rise across the world.

The increase in pensions will be effective from June 1, and that of the floor salary, from July 1. In the eyes of analysts, these measures will not be enough to compensate for the sharp fall in real incomes.

Vladimir Putin had promised in March to fight poverty and inequality this year, despite the heavy sanctions imposed by the West following the offensive in Ukraine and despite inflation.

The measures announced by the Russian president could add to the inflationary pressures facing the Central Bank, which at the end of February carried out an emergency hike in interest rates, to 20%, while the exchange value of the ruble is collapsed. The Central Bank subsequently lowered its rates twice, due to the rise in the rouble.

Finance Minister Anton Silouanov said the cost of the measures this year will amount to around $10.5 billion.