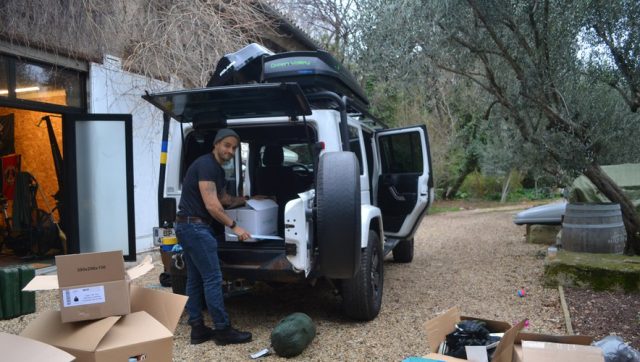 This Friday, March 18 in the morning, the Adissanais takes the road to Ukraine.

“I know this road by heart, I’ve done it dozens of times”, loose Gabriel Hardy Francon. This resident of Addisan sets off this Friday morning towards Lutsk, Ukraine, a city he hopes to reach on Saturday.

In his car: a humanitarian load including a lot of useful drugs in the context of war medicine, protective equipment, tactical glasses, tactical gloves, sleeping bags, night vision binoculars, four jerry cans that he will fill gasoline in Poland…

“Fear does not avoid the danger”

“This equipment is intended for those who go to the front but also for volunteers who go to combat zones to bring food for example”, he explains this Thursday evening, while loading his vehicle. He would have liked to get more bulletproof vests but has neither the time to wait for the parts being made nor the money to finance them. He is therefore content to bring two, for people who are dear to him in Lutsk. One of them is Roman, a friend whose family he has already taken in to his house in Adissan.

“I will help people I know”, he says. Thus, he also has on board 10 kilos of flour “for a baker I know who can’t find any more flour there.” Gabriel was a resident of Ukraine for several years, worked as a journalist in Kyiv Postspeaks Ukrainian and Russian… So of course, he could have sent this collected material with a first convoy that left Addisan on Monday.

We must act quickly

“But people trust me.” He wants to deliver certain orders personally and also intends to take photos and testify. He also knows that we must act quickly. Since the beginning of the Russian invasion in Ukraine, he created his structure, REUM (for Rescue & Equip Ukraine Mission) and raised €15,000, part of which he keeps “in case of emergency” to finance potential evacuations of refugees.

His network, his knowledge of the field, his experience, allow him to be reactive and to aim straight. the day before departure, he is not afraid. “Fear does not avoid the danger. I go there aware of the reality but without any fear“. His objective: to reach Loutsk then Lviv until next Tuesday, the last “deadline, due to professional obligations.

News from Lena and her family

In the middle of the untaped boxes (to avoid problems at the border), there is a package from the Ukrainian Lena Ostroverkh, welcomed in Adissan, for her husband Roman who remained in Lutsk. Their child, Makar, four, started school on Monday in Adissan. As for the administrative formalities concerning the status of the refugee family, they are on the right track at the prefecture.