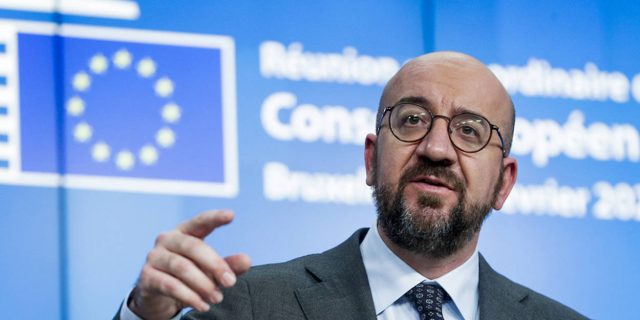 I’European Union, meeting at a summit in Brussels, tightened its sanctions against Russia on Friday, February 25, after its invasion of Ukraine, without however going so far as to exclude the country from the Swift international banking system.

“Russia’s leaders will face unprecedented isolation,” promised Commission President Ursula von der Leyen. This is the “toughest set of sanctions ever implemented” by the EU, said the head of European diplomacy Josep Borrell. The Twenty-Seven decided to trigger “massive and painful sanctions against the Russian regime”, announced the President of the European Council Charles Michel at the end of the meeting.

In particular, the EU will drastically limit Russia’s access to European capital markets, hampering and increasing the cost of financing its debt. It will also reduce Russia’s access to “crucial technologies”, depriving it of electronic components and software, so as to “severely penalize” its economy, explained Ursula von der Leyen.

The President of the European Commission unveiled various measures at a press conference: a ban on the export to Russia of aircraft, parts and equipment from the aeronautics and space industry, as well as refining technologies for the oil industry . Export restrictions will also affect dual-use goods (civilian and military).

EU banks will be banned from accepting deposits from Russian citizens of more than 100,000 euros and several Russian state companies will have their access to European funding blocked.

Read:  Martha is Dead: When the video game makes you a monster

New sanctions will hit individuals in the circles of power (freezing of assets, banning from European territory, etc.). They will be added to those already in force on Wednesday evening, in particular against personalities close to Putin. “The impact will be maximum on the Russian elites”, assures Ursula von der Leyen. Belarus, accused of being involved in Russian operations, will also be hit with additional sanctions.

Sanctions aimed at undermining the Russian industrial base

These decisions are intended to match the shock wave felt throughout Europe after the assault by Russian troops against Ukraine. Josep Borrell estimated that the continent was living “its darkest hours since the Second World War”. European sanctions “will drive up inflation, accelerate capital outflows and gradually erode the industrial base” of the country, said Ursula von der Leyen.

Ukrainian President Volodymyr Zelensky had called for blocking Russia’s access to the Swift banking messaging system to financially isolate it from the rest of the world, like Iran did in late 2019. Some 300 Russian banks and institutions use Swift for their interbank funds transfers.

Read:  Funeral of Federico Martin Aramburu in Biarritz this Saturday: the world of rugby in mourning

But it was not followed. Several Member States are holding back, including Germany, very dependent on Russian gas for its supply, which prefers to consider it for later. German Finance Minister Christian Lindner explained on the ARD television channel that such a measure would entail “a high risk that Germany will no longer receive deliveries of gas and other raw materials” from Russia. Italy, also highly dependent on Russian gas, as well as Hungary, Cyprus and Latvia share Berlin’s reluctance.

A military intervention impossible at the present time

“We must not exclude anything. We must not have taboo subjects. We know that militarily we can’t do anything at the moment,” said Luxembourg Prime Minister Xavier Bettel. “The most moving moment today was President Zelensky’s speech” at the summit, he said. “He told us he didn’t know if he could talk to us another time. »

“Enough of the fine words. Enough naivety”, launched his Polish counterpart, Mateusz Morawiecki, regretting that the EU buys a lot of Russian gas and oil. “President Putin takes our money and uses it to attack, invade and destabilize all of Europe […]we cannot let it cross a new Rubicon”, he continued, calling beyond the sanctions to build “strategic autonomy” for the EU.